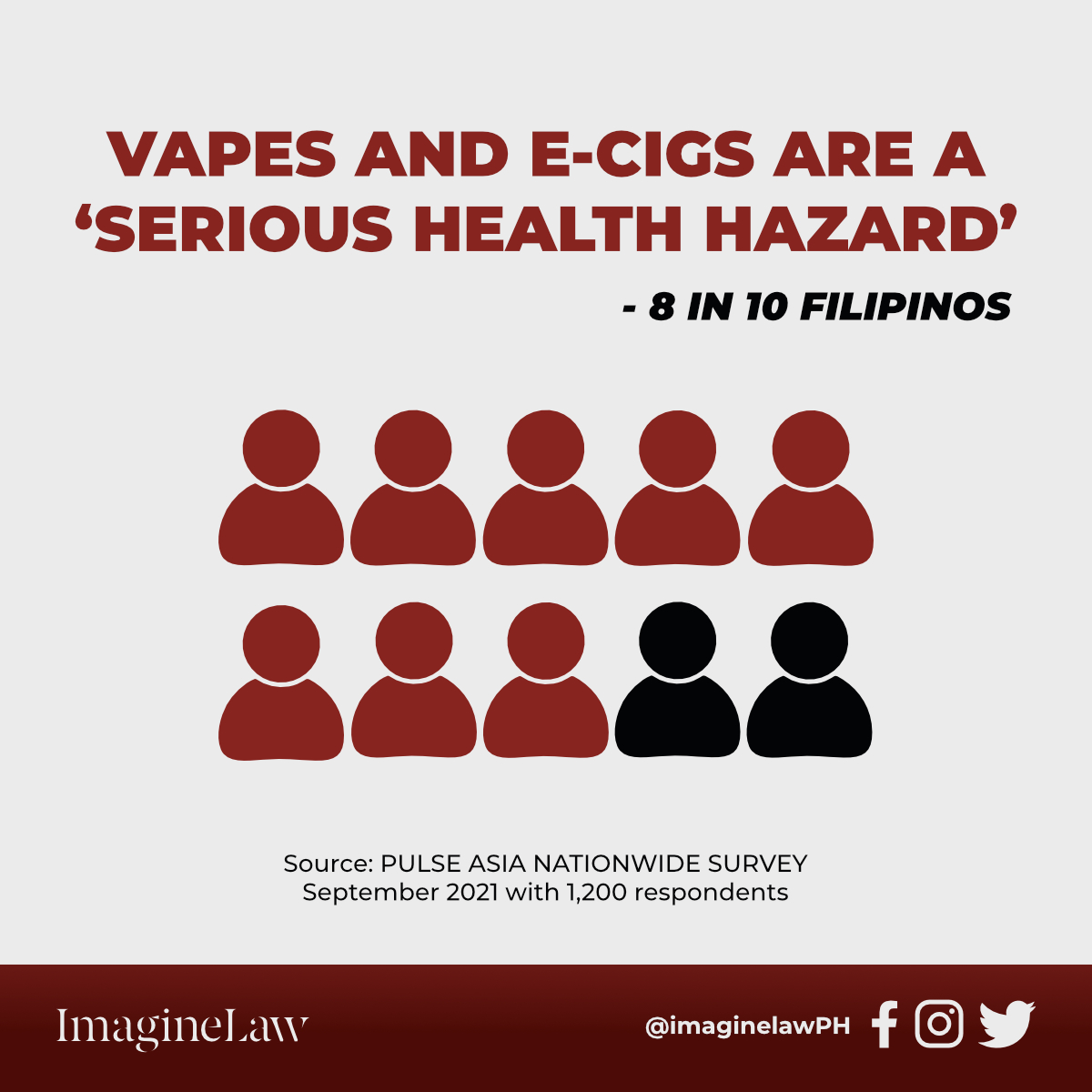 66% of those who use such devices support a ban on flavors that appeal to children, according to Pulse Asia

Almost 8 in 10 Filipinos (or 77%) believe that vaping devices and e-cigarettes are a ‘serious health hazard’. This was according to a recent Pulse Asia survey conducted to gain insight on vaping and e-cigarette habits among Filipinos.

The survey also reported that 74% of the respondents support a ‘100% e-cigarette or vapes-free policy’ in public places while  70% support a policy that restricts age accessibility to vapes and e-cigarettes at 21 years old and above. The fieldwork for the survey was conducted among 1,200 respondents and from September 6 to 11.

The survey results were released as Senators are set to resume their deliberations next week on Senate Bill No. 2239 (SBN 2239) or the Vaporized Nicotine Products Regulation Act, more commonly referred to as the ‘Vape Bill’. Advocacy groups have criticized the measure as a ‘betrayal of public health’, citing provisions that roll back the minimum age of access to these products from the current 21 years old to 18 years old, among others.

Dr. Maricar Limpin of the Philippine College of Physicians urged Senators to ‘junk the measure’ echoing the position of the medical community against vapes and e-cigarettes’ adverse health effects, citing studies that have shown that the products contain cancer-causing agents.

At least 7 former health secretaries and 60 medical groups previously opposed the bill’s provisions that will ease restrictions on the use of flavorings, shift the mandate to regulate such devices from from the Food and Drug Administration to the Department of Trade and Industry, and allow vaping in public places, schools, and hospitals.

“Medical opinion and public opinion are in agreement: vapes and e-cigarettes are harmful to Filipinos’ health,” said Dr. Limpin. “Senators should heed the call of Filipinos and their doctors and reject the Vape Bill,” she added.

“Proponents of the Vape Bill are claiming that vapes and e-cigarettes are a healthier alternative to smoking and help smokers quit. This is not true. There are real health harms in these devices and there is not enough evidence to claim that they help smokers quit,” said the physician.

“In fact, it has been shown in other countries that a higher percentage of people who use e-cigarettes still continue to use traditional cigarettes which presents even greater harm,” Dr. Limpin also said. 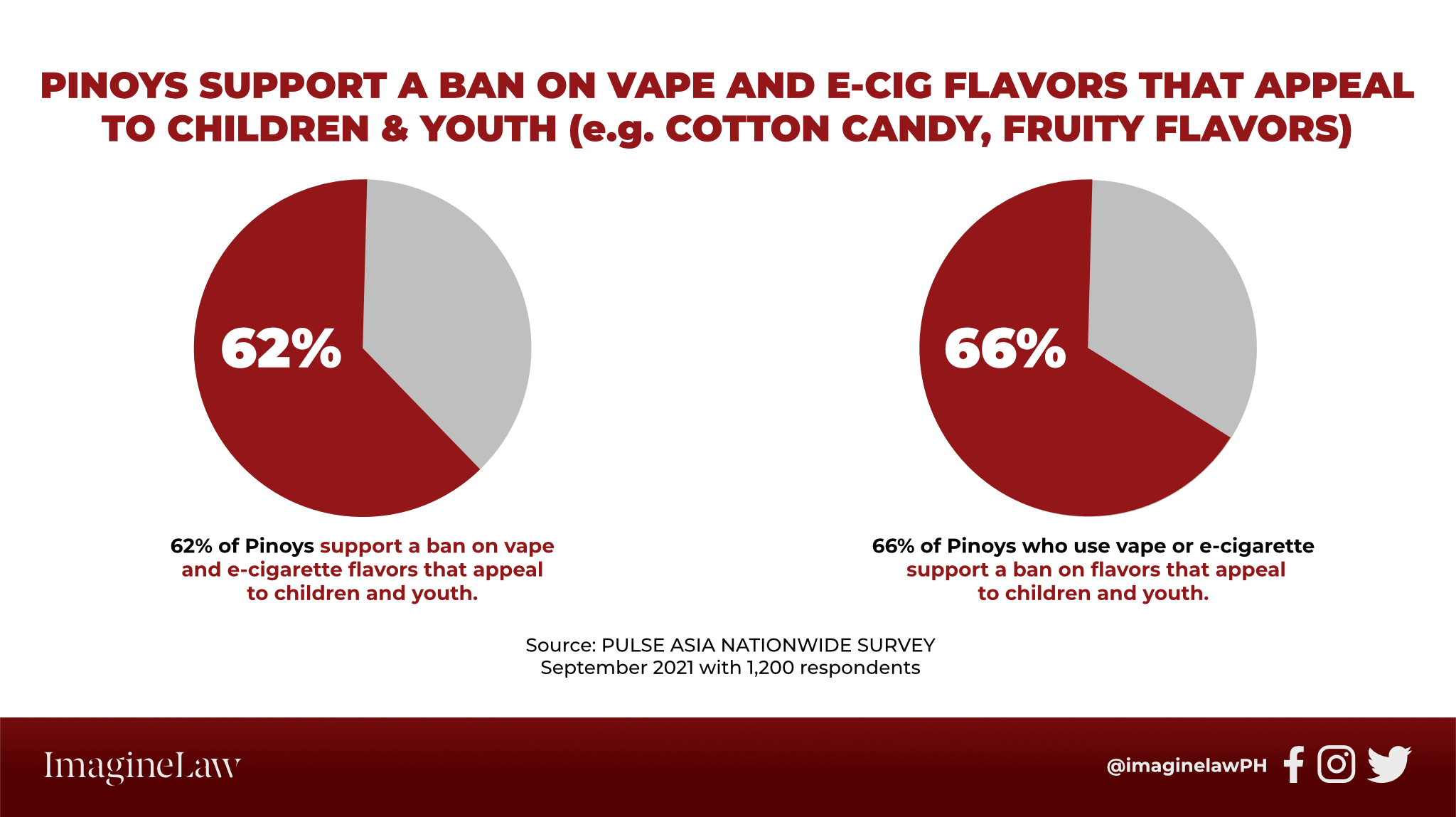 Ban on flavors that appeal to children
Public interest law group ImagineLaw also pointed out that stricter regulation of vape and e-cigarette devices are sought out even among those who use such devices. In the same survey, 62% of respondents (and 66% of respondents who use such devices) said that they will support a ban on the availability and accessibility of e-cigarette and vape flavors that appeal to children and youth (e.g. cotton candy, fruity).

The Pulse Asia survey has a plus or minus 2% error margin at 95% confidence level.