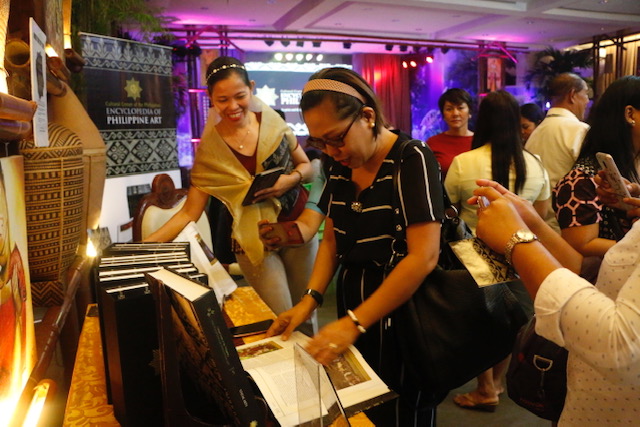 THE Provincial Government of Palawan, led by the Honorable Governor Jose C. Alvarez and Vice Governor Dennis M. Socrates, welcomed the Second Edition of the CCP Encyclopedia of Philippine Art Monday (November 12) to the province of Palawan.

The Second Edition of the CCP Encyclopedia of Philippine Art (CCP EPA) was promoted in Puerto Princesa City at the VJR Hall, Capital Compound.  The event was attended by representatives from various universities and libraries.

The CCP EPA contains some of the most insightful texts about the artistry of our nation. Caesar Sammy Magbanua, Program Head for Palawan Culture and Arts, talked of the many artistic and cultural highlights of the frontier island province featured in the CCP EPA.

“Palawan is home to indigenous groups like the Batak, Cuyunon, Palawan, and Tagbanwa,” Magbanua said. “Although there are influences from the Spanish colonizers, Palawan culture has etched its strong indigenous identity into the Filipino narrative. The region houses the Philippines’ prehistoric roots in the Tabon Cave Complex, and our colonial history can be seen in the Cuyo Church, San Agustin Fortress, and the Fuerza de Santa Isabel, and many other structures.”

With 12 volumes, over 5000 entries, and over 3500 images, the CCP EPA contains quintessential information on everything Filipino from north to south, urban to rural, and indigenous to contemporary.

“The CCP is on a quest to bring art to the Filipino people,” CCP President Arsenio “Nick” Lizaso said. “In becoming the leading institution for arts and culture in the Philippines by promoting artistic excellence and nurturing the broadest publics to participate in art-making and appreciation, we envision a Philippine nation where art matters to the life of every Filipino.” Mr. Lizaso was represented by Ms. Gemma Marco, Head of CCP Sales and Promotions.

Palaweños can now enjoy and learn from the most comprehensive and authoritative reference on Philippine art and culture as the 12-volume encyclopedia makes it way to Palawan bookshelves through the generous assistance of CCP EPA Official Freight Carrier AIR21 and its Chairman Alberto Lina.

The CCP EPA is now on a course to go digital as production for its online edition is currently underway, and is set to be launched next year.  (PR)