The latest international flight from Palawan formally announced last Oct 15, 2019, at the Canvas Boutique Hotel by Michelle Rose Lim, Corporate Communications Specialist of Cebu Pacific. The said announcement will add to the airline’s record of 60 destinations routes to which 37 and domestic and 27 are international flights covering Asia, Australia, and the Middle East.

“We will be flying four times weekly, two schedules sya, 3:35 ang alis sa Puerto Princesa arrival there is 6:30 that’s for Tuesday, Thursday, and Sunday, yung Saturday flight is leaving ng 4pm and arriving there at 7pm, hindi naman ganun kalayo ang difference natin so  masusulit nyo ang stay in Hongkong once your there, because the flight to Puerto are scheduled at night.” Lim said.

In line with the launching of the said route, fare to PPS-Hongkong is also in promo, lowest base start at P1,888, while Piso Sale is also ongoing for travel period from Nov 17 up until March 28, 2020.

Lim is also aware of the national protest ongoing right now in Hongkong, rest assured it won’t affect the airline’s operations, as a matter of fact, Cebu Pacific never reduce its flight in Hongkong ever since the protest started in many parts of Hongkong mainland. 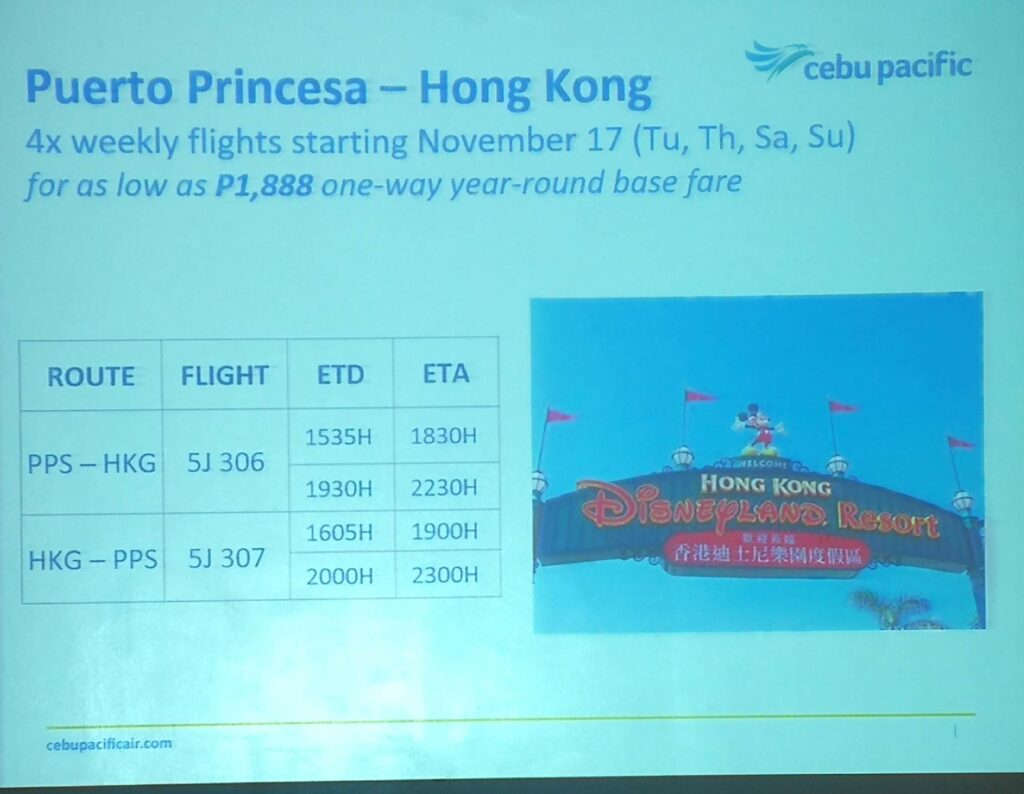 “Before namin buksan ang ruta na to, we conducted studies about it, although we’ve seen a decline sa tourist arrival ng Hongkong, mainly from the mainland of Hongkong but from the rest of the world were good, Hongkong is still fine, in fact Cebu Pacific never reduce our flight frequencies to Hongkong, so we fly from Manila, Cebu, Iloilo, Clark and then etu mag uumpisa tayo nito.” Lim added.

The demand for the PPS-Hongkong route is not only for tourist, one major factor is the Overseas Filipino Workers to which some are Palawenos, opening the route a month before Christmas is a perfect timing, Honkong being a largest aviation hub is also a gateway for westerners to Asia, and having the said flight is bringing them directly to world’s best island.

“We’ve seen there is a demand not only for tourist and business, even for OFW’s in Hongkong, would be easy for them to fly back home in Palawan, were opening it right before Christmas para mahabol na nila kung uuwi sila ng Christmas dito.” Lim explain.

Aside from the said route, Cebu Pacific also announce Cebu-Busuanga route twice weekly, plus the all-new Halal certified meals they serve on board that already start this October.

Cebu Pacific has four domestic routes in and out of Puerto Princesa, to and from Manila, Cebu, Iloilo and the newest one is Clark starting also by November 17.  They started operating in Puerto Princesa in the year 2003 with the PPS Manila route, they hold the largest capacity share flying out and in of Puerto Princesa compare to other airlines.

By end of 2019, Cebu Pacific forecast in flying about 1.1 million passengers in out of PPS, upgrading of their aircraft is also ongoing as they committed to have 1 modern aircraft monthly in order to open more routes, so far they have a total of 74 aircraft and airbus, they target to fly 200 million passengers come 2020.