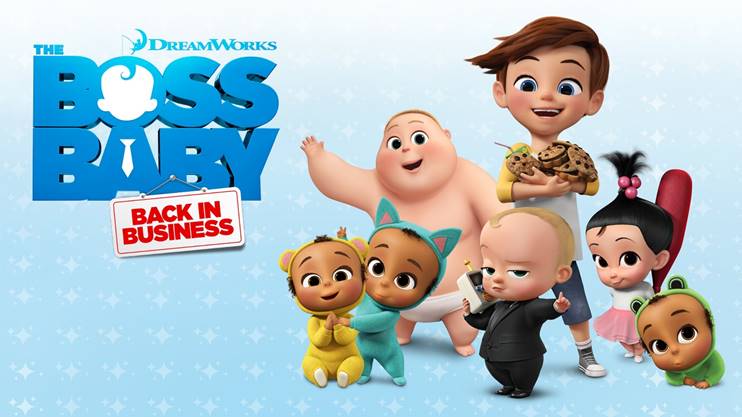 NBCUniversal International Networks’ 24-hour channel dedicated to kids and family entertainment – today announces the channel premiere of The Boss Baby: Back in Business. The new series brings a colorful mix of happy chaos, family love, and heroism to the small screen. The series will premiere on the DreamWorks channel from Monday, July 6 at 6:30 pm (PHT).

Following on from where the blockbuster movie left off, the new animated series follows practical and savvy salesman Boss Baby, and his idealistic, imaginative and naive older brother, Tim, on a variety of exciting neighborhood missions to save the baby world.

With the help of his big brother, and partner in crime, Boss Baby navigates the cut-throat corporate jungle gym of Baby Corps to keep babies on top of the love distribution charts, while angling to achieve the near-impossible: a work-life balance.

Although Boss Baby’s hardened corporate perspective serves him well, his brother Tim is the muscle on field ops but doesn’t always think things through – he’s a regular kid living life with gusto and the belief there’s no dream that can’t come true.

Executive produced by Brandon Sawyer (Penguins of Madagascar), the much-loved TV series will bring episodes loaded with laughter, mischief, and adventure. The Boss Baby: Back in Business will join a line-up of fan-favorite shows on DreamWorks, including the recently released series Kung Fu Panda: The Paws of Destiny and Where’s Wally?, in addition to Trolls: The Beat Goes On!, Dragons: Race to the Edge, The Adventures of Puss in Boots, and All Hail King Julien.

The Boss Baby: Back in Business premieres July 6 with episodes at 6:30 pm (PHT) weekdays on DreamWorks. (PR)