Bringing Ogura Hyakunin-isshu Kyogi Karuta from Otsu, the Holy Land of Karuta, to the World

Bringing Ogura Hyakunin-isshu Kyogi Karuta from Otsu, the Holy Land of Karuta, to the World 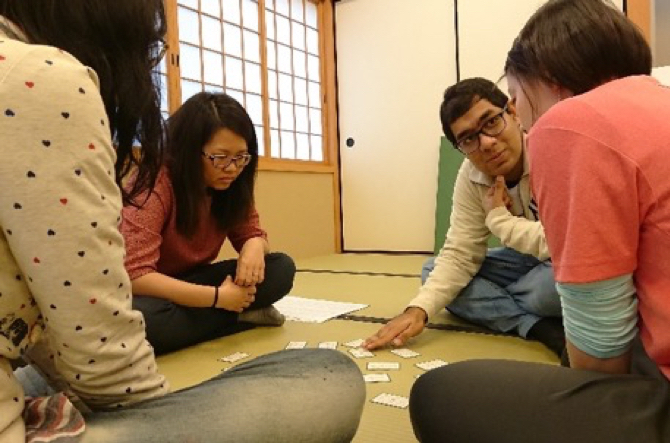 The same karuta trial lesson is scheduled to be held on Monday (national holiday) February 24th at Omi-jingū Shrine’s Omi Kangakukan. We are recruiting participants until Friday, February 21st.

Kyogi Karuta is known as a competitive sport that takes place on tatami mats, where cards are fought for and taken within 1/100th of a second, requiring memorization and concentration skills as well as good reaction speed and stamina.

In recent years, due to the influence of manga and the Japanese film Chihayafuru, there has been a considerably large increase in the number of players from foreign countries that have helped Kyogi Karuta grow in popularity. As a result, international students from Brazil, China, France, Indonesia, the Philippines, Russia, Sweden, Taiwan and other countries have applied to participate.

On the day of the trial lesson, the international students learned the basics of karuta poems, how to arrange karuta cards, and actually played with Mr. Naoki Ishizawa from Otsu Akinota kai, who has a rank of 8th DAN in Kyogi Karuta.

Participants: “I’ve never heard of karuta before and read about it for the first time in the trial lesson flier.”, “I have wanted to play since I first saw kyogi karuta and was amazed at the speed they played the game.”

After the trial lesson the students left these comments. “At the first trial lesson, I was a bit apprehensive of hitting the body when you take a card, but after a bit more practice I became more confident and wanted to continue to improve more.”, “I would love to participate in kyogi karuta again!”

Everyone very much enjoyed participating in their first karuta experience and have expressed that they would love to try karuta again. 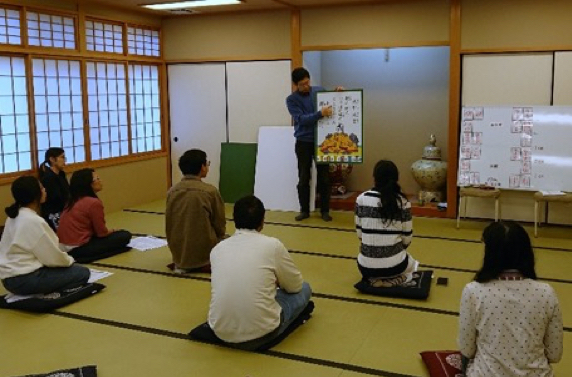 Otsu, the Karuta Mecca
Blessed with magnificent nature and history, such as Japan’s largest lake “Lake Biwa” and the world cultural heritage “Hieizan Enryakuji Temple”, Otsu is also home to Omi-jingū Shrine where the author of the first poem in the Ogura Hyakunin Isshu – Emperor Tenji – is enshrined. Therefore, Otsu is known as the Karuta Mecca. The championship matches for Kyogi Karuta are famously depicted in the manga and animated film Chihayafuru, and the National High School Ogura Hyakunin Isshu Tournaments, which are held here each year.

The “Otsu Hikarukun Cup” has been held in Otsu, the Karuta Mecca since 2018 in order to spread interest in Karuta all over the world and encourage interaction with people who love karuta.

In addition, it is now official that the 3rd Otsu Hikaru-kun Cup in 2020 will be held on Saturday, May 23rd as the ‘Tokyo 2020 NIPPON Festival Co-sponsored Program 2020 International Ogura Hyakunin-Issyu Karuta Festival’ in association with All Japan Karuta Association, Awara City, Fukui Prefecture and Bunkyo City, Tokyo.