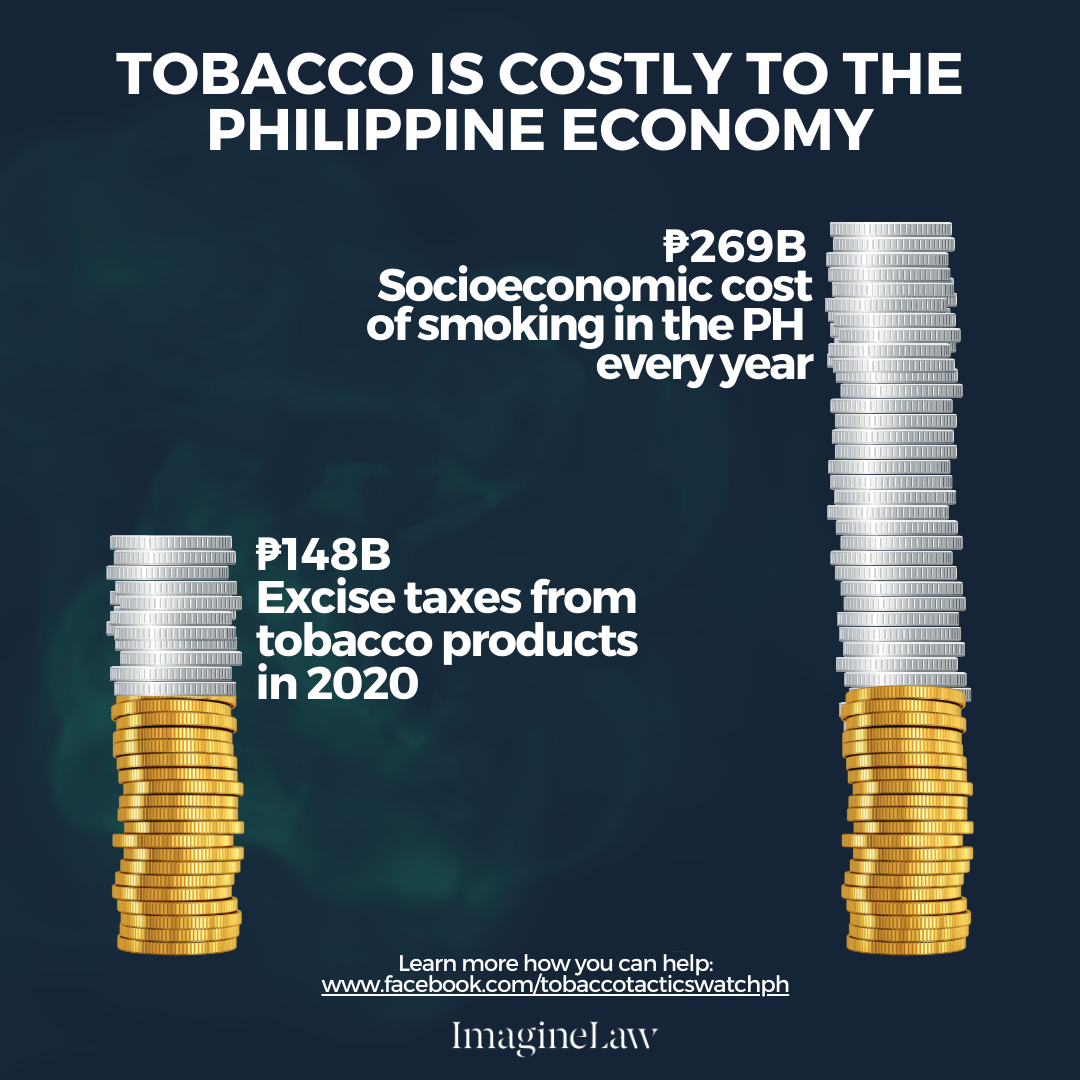 Every year, the country loses at least 260 billion pesos due to tobacco-related healthcare cost and productivity losses, according to law group ImagineLaw, citing data from the Southeast Asia Tobacco Control Alliance (SEATCA).

Aside from killing 117,000 Filipinos every year due to cigarettes and second-hand smoke, tobacco-related healthcare costs took away 65.80 percent of the country’s gross domestic product in 2012, according to the law group, citing the same report.

While the country loses at least 260 billion pesos yearly due to tobacco-related healthcare costs, taxes collected from cigarettes amounted to P148.45 billion in 2020, according to the Bureau of Internal Revenue.

Despite these alarming numbers, the tobacco industry continues to sell and market a product that kills half of its users, according to the law group. “In the time of a pandemic where it has been shown that smokers are at a greater risk of severe COVID-19 outcomes, tobacco companies’ CSR activities are nothing but distractions and a way to relax tobacco control policies,” Atty. Bueno also said.

Tobacco-related illnesses translate to financial losses in the workforce, according to the law group. “These illnesses force an individual to temporarily or permanently stop going to work, contributing to major losses in human productivity,” the lawyer said.

“The Philippines is losing so much to the tobacco industry. We are not only talking about billions of pesos, we are also losing dreams and aspirations. Imagine a father, who has just entered the productive years of his life, falling victim to a lung disease caused by smoking,” she said. “You mourn the life of the father, but the burden of his death also affects a whole family in ways we cannot even begin to imagine.”

”No act of public relations or PR can mask the reality that tobacco is dangerous and deadly,” ImagineLaw emphasized. “The tobacco industry’s donations are nothing compared to the amount of resources it depletes and the number of lives it claims.”

“Instead of falling into the PR trap of cigarette companies, the government should boost its anti-smoking campaigns and strengthen smoking cessation programs,” urged Atty. Bueno. “The government should also continue to reject any move by the tobacco companies and their fronts to relax tobacco control policies,” she added.

The law group declared that tobacco companies should be held liable by the government for making smokers and secondhand smokers more susceptible to severe COVID-19 symptoms. “Tobacco companies put public health at risk, there’s no denying that,” added Atty. Bueno.

“Now, more than ever, the government needs to remain steadfast against moves by the tobacco industry to interfere with our public health policies. These policies should be upheld and their implementation strengthened. What we urgently need is a stronger public health system, not  tactical donations that are only meant to take away our resources and lives,” she concluded. (PR)