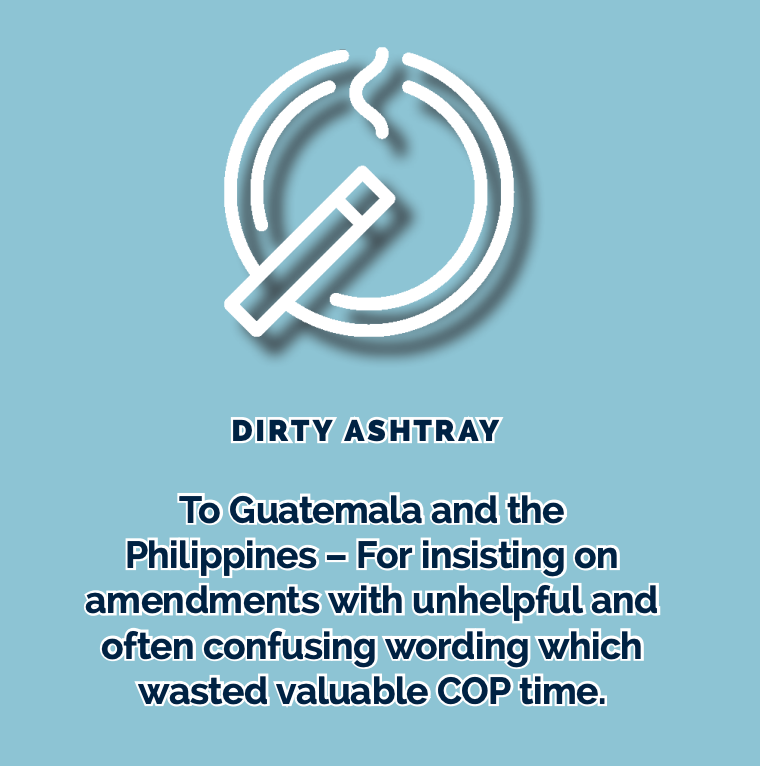 At the end of Day 1 of the Ninth Conference of Parties (COP9) to the WHO Framework Convention on Tobacco Control (FCTC), the Philippine delegation merited the infamous Dirty Ashtray for multiple statements insisting on unhelpful language that has severely delayed adoption of the COP9 agenda and is obstructing the work ahead.

In 2010, the Philippines, led by the Department of Trade and Industry (DTI), was given its first Dirty Ashtray for promoting tobacco industry interests above public health at the Fourth Conference of Parties to the FCTC (COP4).

The Southeast Asia Tobacco Control Alliance (SEATCA) criticized such statements as detrimental to the goal of COP9, which aims to strengthen tobacco control measures as a way to promote sustainable recovery from the COVID-19 pandemic.

“I would be surprised if the DOH agreed to these statements by the Philippine delegation, which serves tobacco industry interests. The FCTC itself obligates Parties, including the Philippines, to protect tobacco control policies from tobacco industry interests. Certainly, the COP9 is not a place to coddle this dangerous industry and give it a chance to join the policy discussions,” said Dr. Ulysses Dorotheo, SEATCA’s Executive Director.

The Framework Convention Alliance is a coalition of more than 300 organizations across 100 countries that supports the implementation of the WHO FCTC and will award Orchids and Dirty Ashtrays each day of COP9.

The WHO FCTC COP9 will be held from 8 to 13 November. SEATCA is attending as an accredited NGO observer.