Throughout its 52-year illustrious history, Repertory Philippines has allowed audiences to see the world with new eyes. By transporting them back in time or putting them in the shoes of another, REP has always reflected humanity in all its great diversity. For its 83rd season, REP is holding UP a mirror to different experiences, highlighting stories that are both unique and familiar.

The 2020 season opens with The New York Times’ Critic’s Pick of 2014, Stage Kiss by American playwright Sarah RUhl, which runs from February 7 to March 1, 2020. This romantic comedy takes audiences backstage and introduces them to She and He, two stage actors who find themselves cast as lovers in a 1930s melodrama. But She and He have a romantic history together, and after sharing several stage kisses as their characters, they unintentionally rekindle their love. A deliciously witty and insightful play about life imitating art and art imitating life, Stage Kiss stars Missy Maramara, Tarek El Tayech, Andres Borromeo, Justine Narciso and Mica Pineda, among others, and is directed by Carlos SiguionReyna, renowned and multi-awarded filmmaker of critically-acclaimed movies Hihintayin Kita sa Langitl Ligaya ang Itawag MO sa Akin, and Azucena. 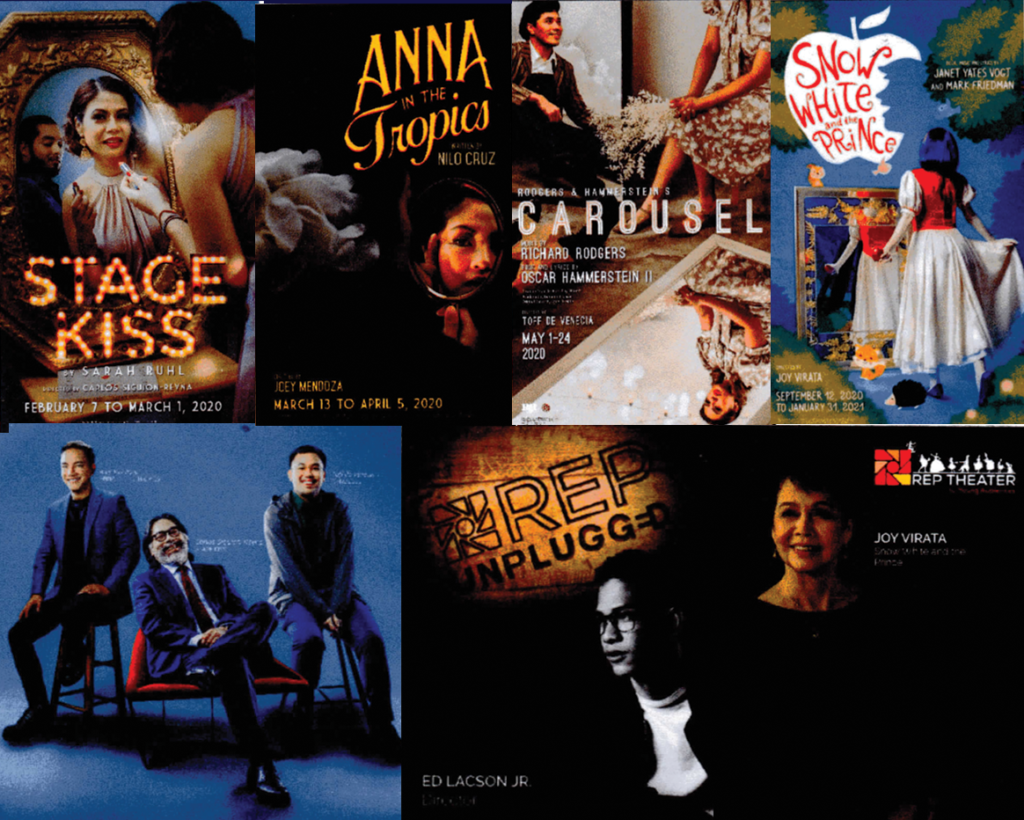 From March 13 to April 5, 2020, the Pulitzer Prize-winning Anna in the Tropics by Cuban-American playwright Nilo Cruz comes to the REP stage. When Juan Julian arrives in Tampa, Florida in 1929, he unwittingly heralds change in the Cuban cigar factory where he has been employed as a lector. As he reads aloud from Leo Tolstoy’s passionate Anna Karenina, the workers soon find the story creeping into their lives and informing their decisions. Marriages collapse, affairs are pursued, and tensions run high as the workers are confronted with the threat of automation. Directed by New York-based noted production designer Joey Mendoza and starring Ana Abad Santos, Jake Macapagal, Paolo O’ Hara, Brian Sy, Gab Pangilinan, Gie Onida and Madeleine Nicolas, Anna in the Tropics paints a sympathetic portrait of oppressed laborers and lovers who flout tradition, as it shows the transformative power of literature.

The universally-loved and enduring favorite Rodgers and Hammerstein Broadway musical Carousel caps off the season and runs from May 1 to 24, 2020. Helmed by much lauded young director Toff de Venecia, the production showcases a star-studded cast led by the luminous pairing of Nikki Gil and Gian Magdangal, who will both be making their REP debut. The musical follows a poor young couple, millhouse worker Julie Jordan and carousel barker Billy Bigelow. When they both lose their jobs because of their whirlwind love affair, Billy is pressured into committing theft to provide for their unborn child. After everything goes tragically wrong, he is given a chance to make things right. Hailed as TIME Magazine’s Best Musical of the 20th Century, Carousel explores the heartbreak and complexities that make its characters so tragically and wonderfully human.

REP 2020 ends with REP Theater for Young Audiences’ (RTYA’s) children’s musical Snow White and the Prince by Janet Yates Vogt and Mark Friedman. From the same writers of REP’s mega hit 2018 production Rapunzel, Rapunzel, A Veo.’ Hairy Fairytale comes this witty new take on a beloved classic. Running from September 12, 2020 to January 31, 2021, this play is directed by none other than the legendary Joy Virata. When Snow White meets her prince at the ball, they fall in love. But when the magic mirror tells the Evil Queen that Snow White is the fairest in all the land, she burns with jealousy. She vows to vanquish Snow White, but the young girl flees into the forest and befriends seven UN-JSUal miners. Children of all ages will delight in this fun re-telling of this beloved fairytale that reminds us that people united in goodness are more powerful than the forces of evil.

For the first time in REP history, audiences will get to experience REP Unplugged, an edgy and exciting new staging concept that is independent—or  the rest of the season. Directed by theater wunderkind Ed Lacson Jr., REP Unplugged is alternative theater and will be performed in unconventional performance spaces. It will be launched in June 2020 during the interim between REP’s first three plays and its children’s production. Featuring an out-of-the-box approach and a fresh take on theater, REP Unplugged is ready to shake things up.