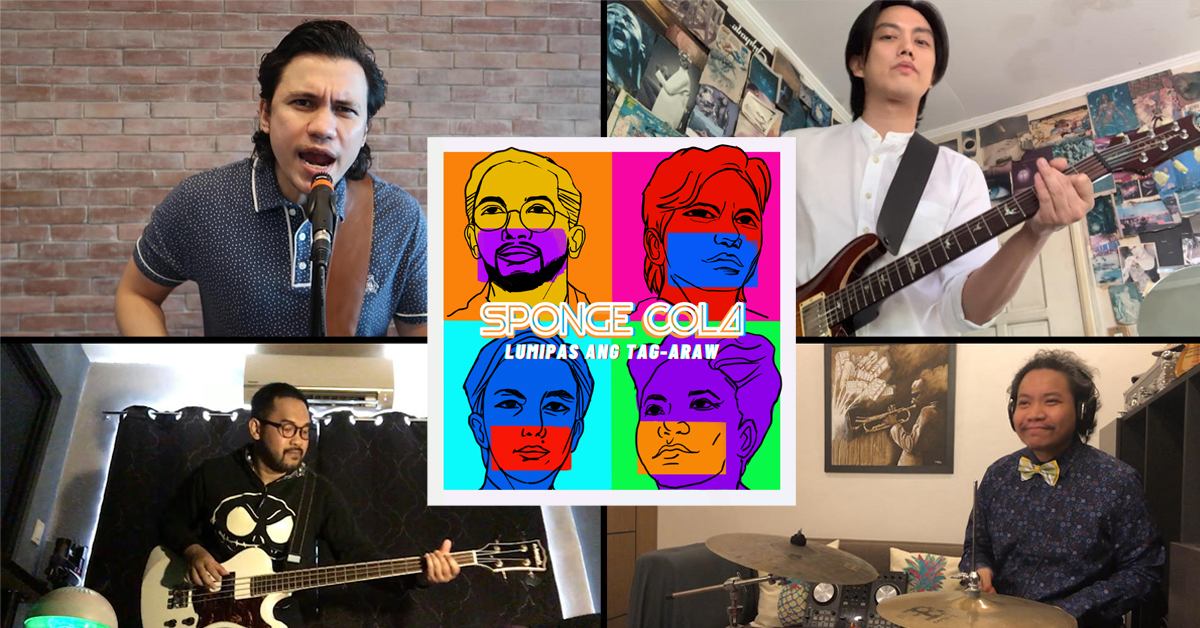 Sponge Cola is now back with Sony Music—the record label that released their debut album, Palabas.

To mark this return, the award-winning band drops a new song entitled “Lumipas Ang Tag-araw,” out on all digital platforms worldwide.

Capturing the essence of a belated summer anthem in less than four minutes, Sponge Cola’s latest single soars into the fast lane with verses that turn romantic yearning into an inescapable sing-along, and a power pop surge that packs a ton of punch.

The captivating and relatable lyrics echo the collective frustration of not being with the people we deeply care about and love. But on the other side of the narrative, the song presents an opportunity to weather the insurmountable odds through perseverance and resilience to get through life—thanks to the support and kindness of friends and family. “It’s a story of connection in separation, and how we can be a source of comfort for each other during difficult times,” guitarist Armo Armovit adds.

Vocalist and guitarist Yael Yuzon fondly recalls the inspiration behind “Lumipas Ang Tag-araw” after driving his wife to work one morning under the new normal. He remembers becoming intensely emotional out of nowhere. “It was a strange feeling: a realization about everything that has or hasn’t happened since Covid-19, which yanked us away from our usual. And at that moment, this bright and happy melody just came to me, then some words and harmonies. When I got home, I fleshed everything out and recorded a demo within a few minutes. I guess I just needed to uplift myself, so I wrote something uplifting– something that doesn’t highlight the struggle everyone has been trying to deal with during the pandemic and the lockdown.” The creative and emotional surge led to writing the initial draft of “Lumipas Ang Tag-araw”—a love song that deals with the struggles of physical connection in the time of pandemic.

The upbeat pop-rock tune is the first song that the band arranged and recorded in the comforts of their home, without being together in the same place. Armovit shares the challenging process that transpired during the preliminary stages of the recording. “We sent demos and voice memos to each other back and forth, tweaking parts, creating variations, until we all agreed on a final arrangement. Everyone then had to record their own parts at home and send it to a communal online drive for the producer, Angee Rozul, to bring everything together for the final track.”

Under normal circumstances, Sponge Cola would usually write the song, arrange it in a rehearsal space, and record it together in a studio. But due to the nationwide lockdown imposed in the previous months, the alternative rock quartet decided to use the time and resources available at their disposal to record individually at their own place. “There was a lot of self-editing because you’re not being policed by your bandmates or a producer constantly keeping tabs on possible mistakes or improvements, at least in person,” says Yael Yuzon. “It was all about laying in your parts when the song was passed on to you, and you had the responsibility to keep things right and easy for the next guy to add on to.”

According to Armovit, the lockdown-inspired music video of “Lumipas ang Tag-Araw” takes an intimate look into the fictional and real-life character’s personal worlds—their bedrooms, living spaces, confined homes—and the routine that they’re up to, in hopes of coping with the situation under quarantine. “It was also our first time working under special conditions, where we had to film all the scenes ourselves with our own phones and cameras. I’m very thankful for the help and guidance from King Palisoc, our director, and the creative ideas from his team.”

The music video will be released on August 1, Saturday via the band’s official YouTube page. (PR)