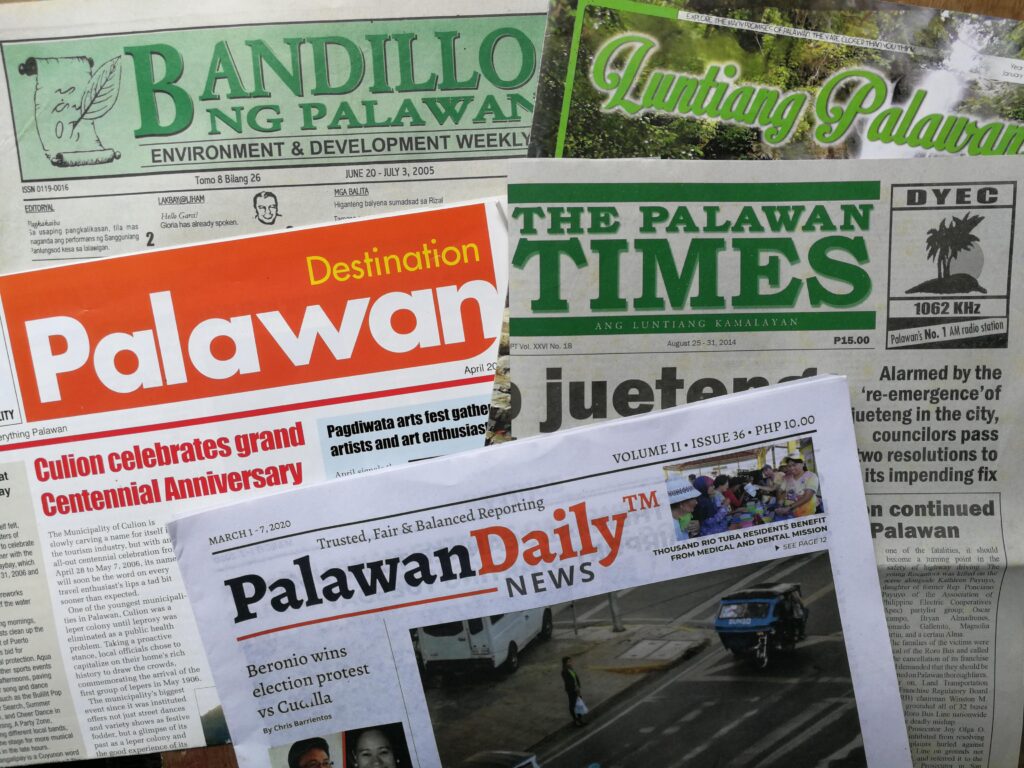 There are numerous newspaper and magazines in Palawan, some stay long while many didn’t survive the competition, usually, these are the tabloid type that is published from monthly to weekly basis, many of it is in English with Filipino news or Tagalog column inserts.

If I may recall according to my research, the oldest newspaper in Palawan is Tabon Times way back 70’s, but its existence was cut abrupt probably due to logistics concern, many of the newspaper during the early years was not printed in the province, and it was a big chunk of money for publication due to shipping from a printing press in Metro Manila going here in the province. 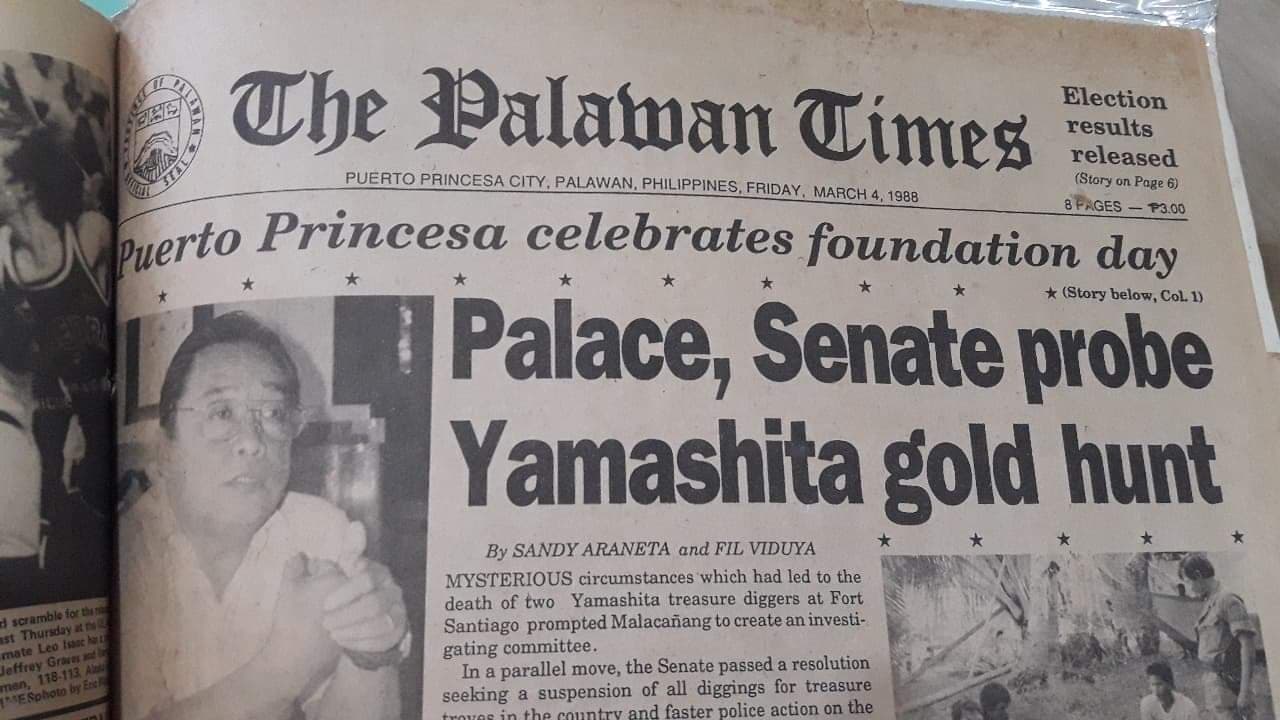 It was early 90’s when newspaper business flourishes in Puerto Princesa, Palawan Sun was a great name in terms of reportage, many of its writers including yours truly became legit broadcasters in different radio and TV station even until now, some are still writing news in the national daily, these writers include Andrew Atienza, Rod Evangelista, Claudio Dacquer and Ruel Albert Castro, but it didn’t last long as well, it was past 2000’s when the paper made a goodbye. 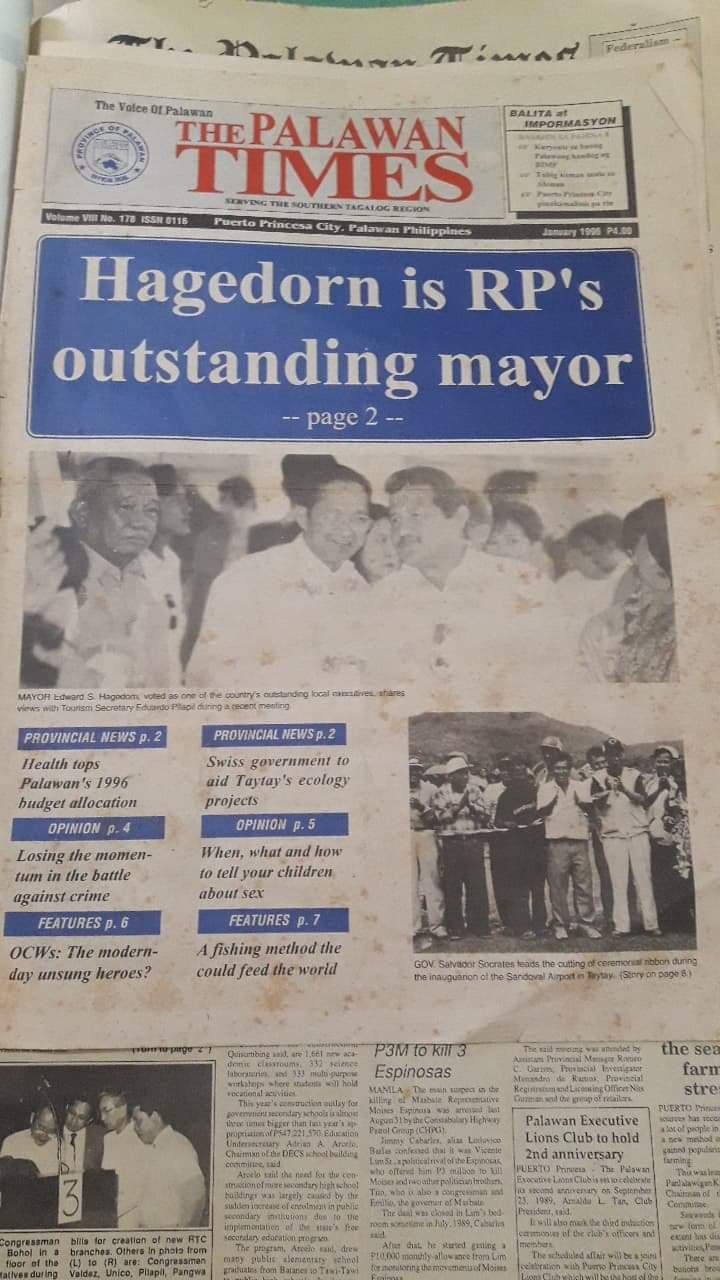 Palawan Times is the only surviving newspaper until now here in the Province, it is so far has the wide coverage wherein you will find many legal notices publish.  Palawan Times was able to produce yearly magazine before called “Luntiang Palawan”, but it didn’t continue, many are saying that Palawan Times is a continuation of Tabon Times. 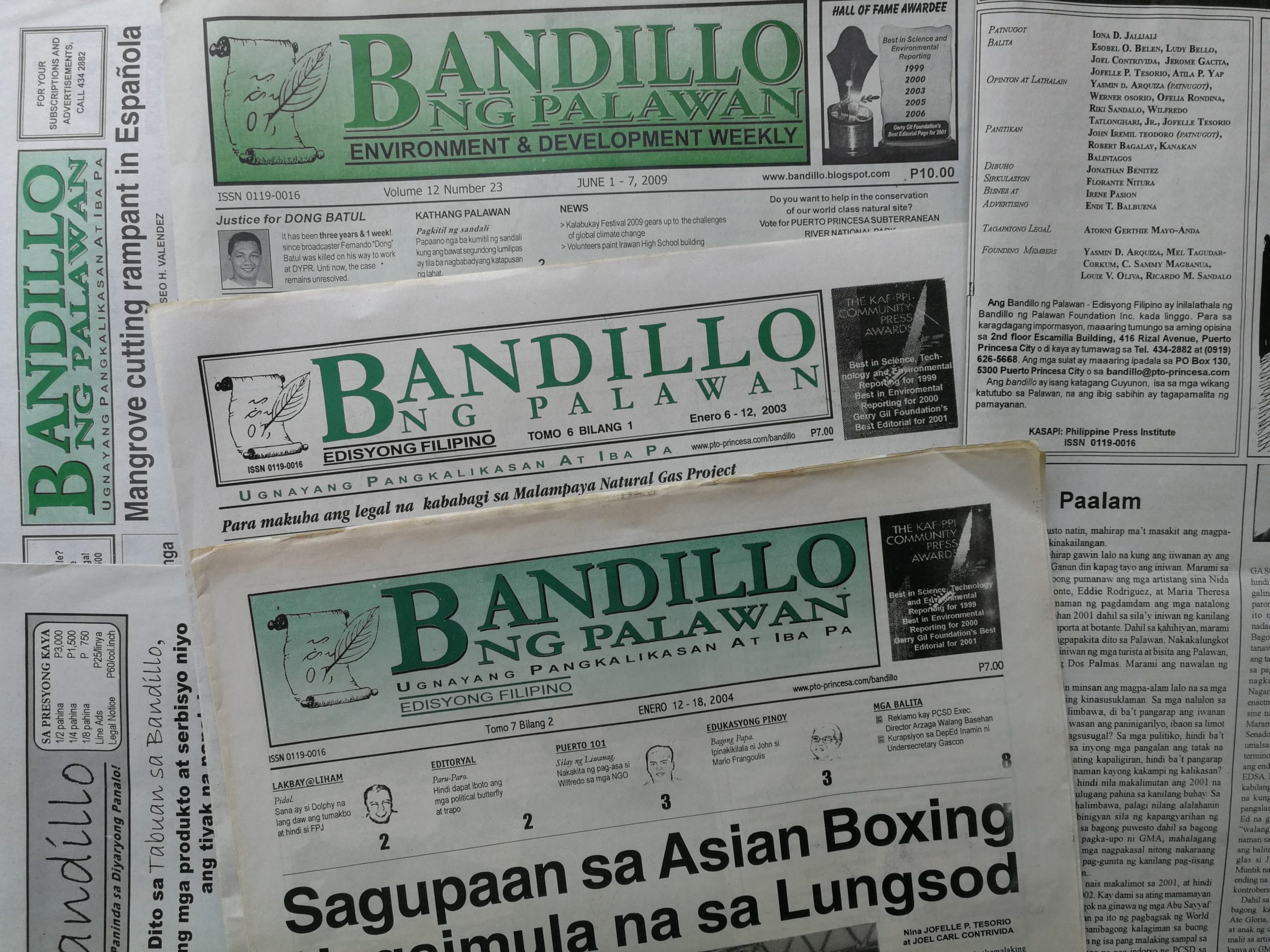 Bandillo Ng Palawan was the most sought after newspaper in the province, from being a monthly feature magazine, Bandillo became a weekly and introduce one of the most read column in Palawan, the Sipet-Sipet Espesyal that give birth to showbiz and entertainment reporting in the province. Bandillo is the only award-winning newspaper in Palawan having a full list of many environmental awards from the Philippine Press Institute.  It also became the home of many Palawan’s prolific writers and authors such as Yasmin Arquiza, John Iremil Teodoro, Kanakan Balintagos, Joffele Tesorio, Lourdes Escaros, Leny Escaro and many more. It was 2010 when Bandillo decided to close its publication. 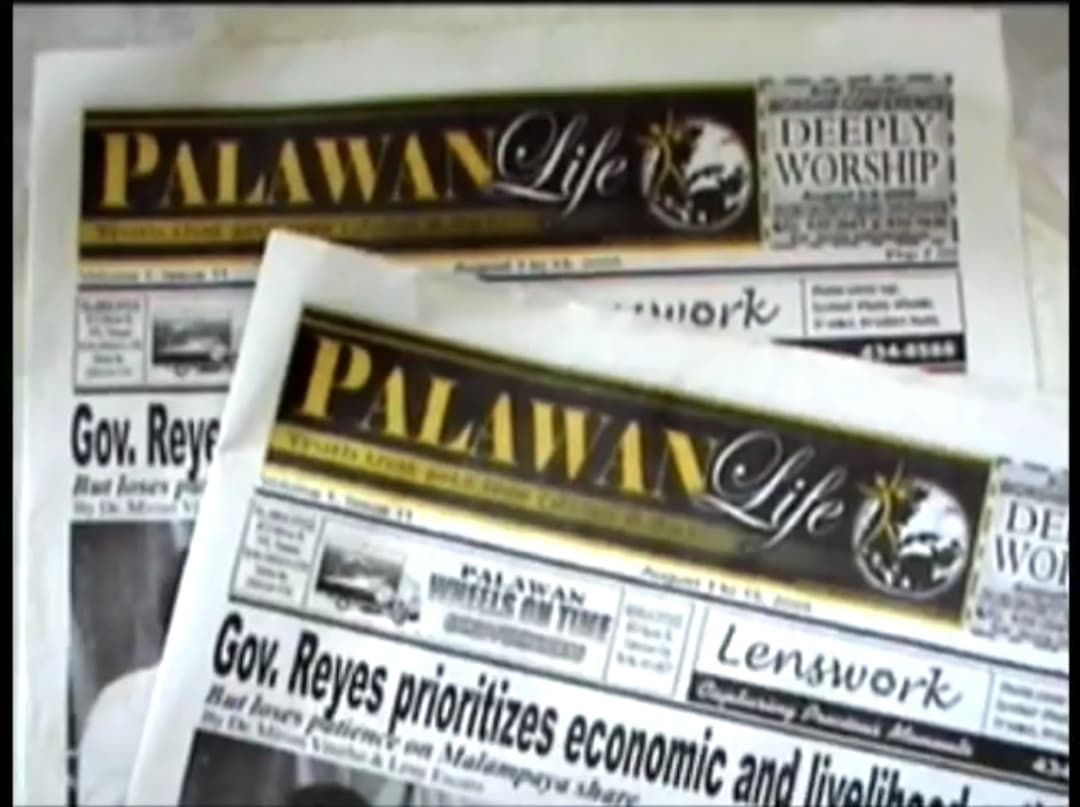 Other newspapers in Palawan that somehow made history yet didn’t last long are Frontier News of former Philippine News Agency Bureau Chief Beethoven Crasco, Tandikan Newspaper, Palawan Life by the Life Renewal Christian Ministry and the classic Palawan Mirror that became famous for its Face of the week feature by Ricky Obligar. 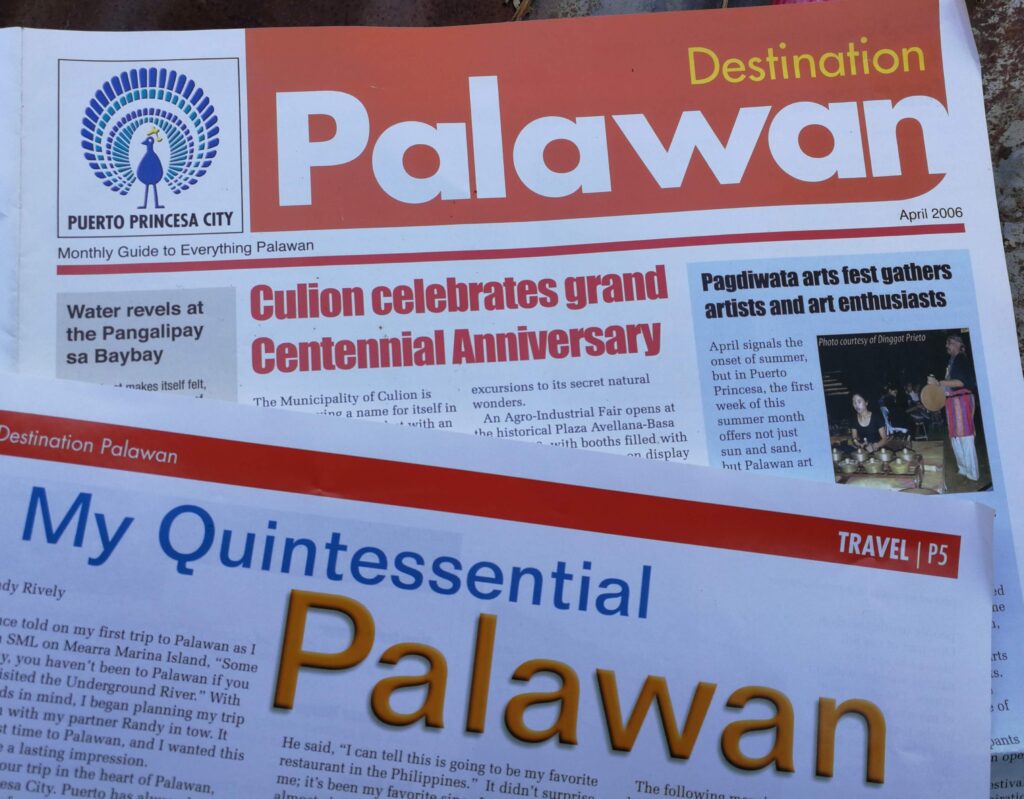 Destination Palawan is so far the only colored and glossy newspaper of Palawan ever produce even to this date, but its operation is not based in Puerto Princesa or in any island town of Palawan, their office in Makati City is called Palawan Center. They are just sending the copies via airlines to different government agencies, and tourism establishments such as resorts, restos, and hotels all over Palawan.

Publish by Intramedia Publication, this paper according to my research started its operation around 2003 and last until 2008, most of their stories are contributed by different Public Relations office in Palawan, and sometimes they send staff writers to cover big events and festivals, they are only focused on travel and feature stories. 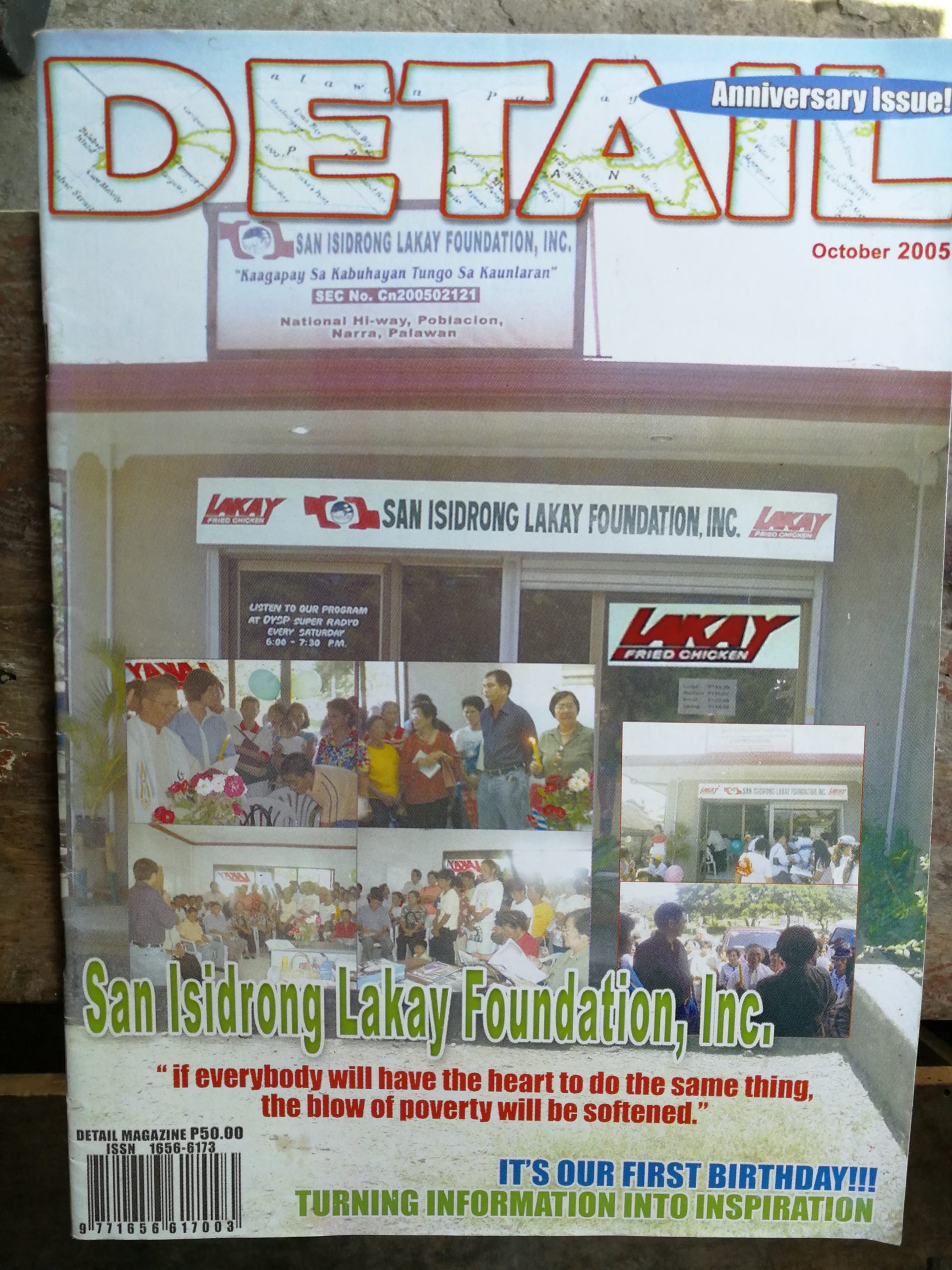 For Magazine, no commercial publication last for more than 2 to 3 years, one notable Magazine that is business-oriented is Detail by Palawan Multi Media Services, Inc, it is a monthly thing that gives a feature to all the big and small businesses in Palawan.

Many of these newspaper and magazine die due to lack of support from local advertisers, given a fact that radio both AM and FM and the TV are the preferred one by many of the businesses in the province during those times, most of these papers survive due to publication of legal notices and writing grants, but it is not sustainable in nature since printing cost is a high expense each issue they publish.

At present, Palawan have five newspaper continue and surviving in publishing, some of them have online platforms too like Facebook page and websites. These are Palawan News, Repetek, Palawan Daily News, Banat Newsweek, and of course the unbeatable Palawan Times.