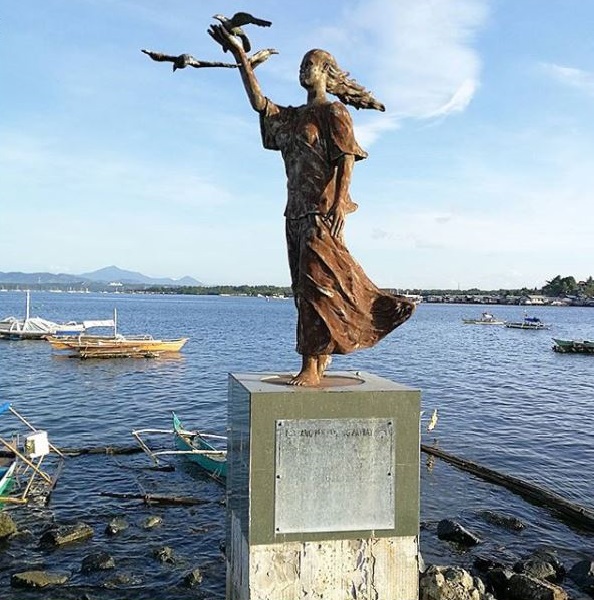 Almost 13 years after, many people are still wondering what is the story behind the lady statue in the Baywalk area of Puerto Princesa, many believe it is the Princess of the City according to the myth and legend say, some claim it is Princess Eulalia of Spain, to which Puerto Princesa was named as a tribute.

But the truth is and the real story is, the Prinsesa ng Baybay was a project of Rotary Club of Puerto Princesa under the leadership of Palawan Pawnshop tycoon Bobby Castro in 2007 as support to the former Mayor Edward Hagedorn, it aims to have a landmark same like Merlion of Singapore and the Little Mermaid of Denmark.

It was a design contest at first that was launched July 13, 2007, and it was open to all artist of the City that can create a special landmark monument under the theme “Ang Prinsesa ng Baybay, Simbolo ng Ating Kultura at Buhay”.

After the deadline on September of that year, a special set of jurors were selected by the Rotary Club to choose the best design, it was Zaldy Jumawan and Elordie Mesac design that stood up, the jury decided to combine the works of the two artists, and let the sculptor interpret it.

Some sources told Palawanderer that the reason they choose the two design is that the other one doesn’t look like Tagbanua that supposed to have a flat nose, the said tribes are the original and first residents of the City and the face of Prinsesa should have a resemblance of them.

Jumawan is from Dumaguete that stay in Palawan for quite some time, he already go back to his hometown many years ago, while Mesac is a Tagbanua who got learnings about art from Charles Wandag under his Aborlan Arts Program.

It was December 7, 2007 the Rotary Club unveils the 100-kg Fiberglass statue at the City Coastal Reclamation Area or popularly known today as Baybay or Baywalk, Manila-based sculpture Ronel F. Roces was commission in putting up the statue base on the design from Jumawan and Mesac.

After its unveiling, the two artists express dismay with the result of the sculpture, Jumawan in his interview over DYPR then find the final design very far from their original idea, of a Princess watching a sunset in a seashore that have birds in her background. Jumawan as per source questions the materials used because it will make the statue look hardened as they age and looks awkward.

But the Rotary didn’t issue a statement after that and issue die on its natural cause, Atty. Rohima Sarra, the Club Vice President that time was the overall chairman of the project. 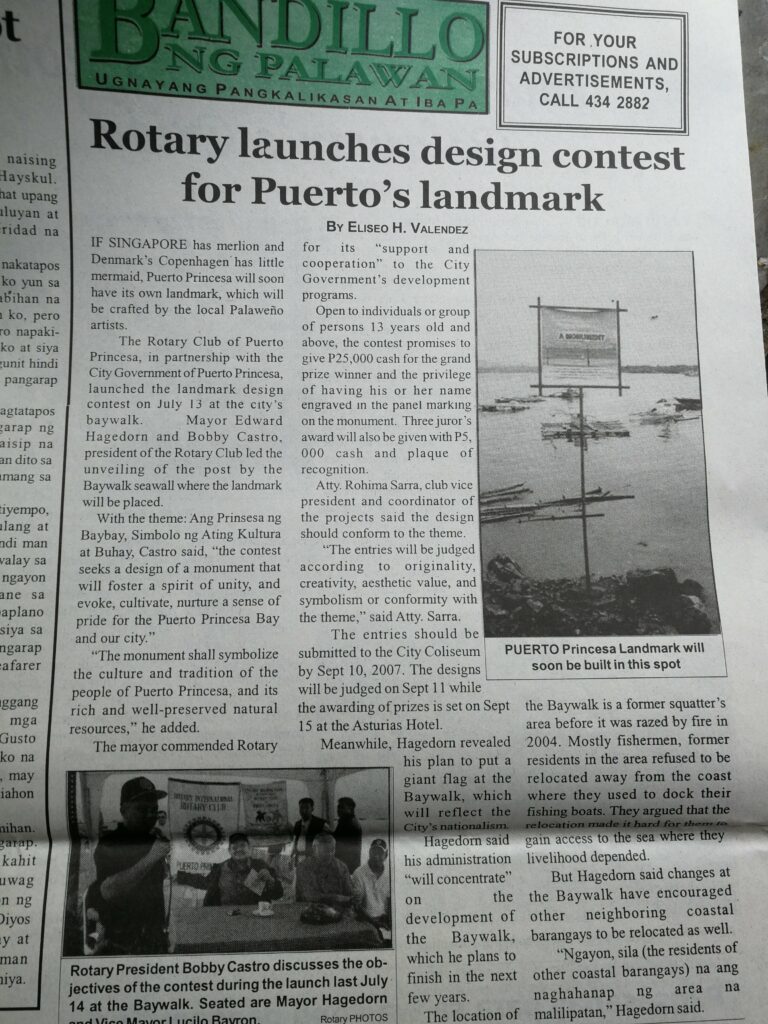 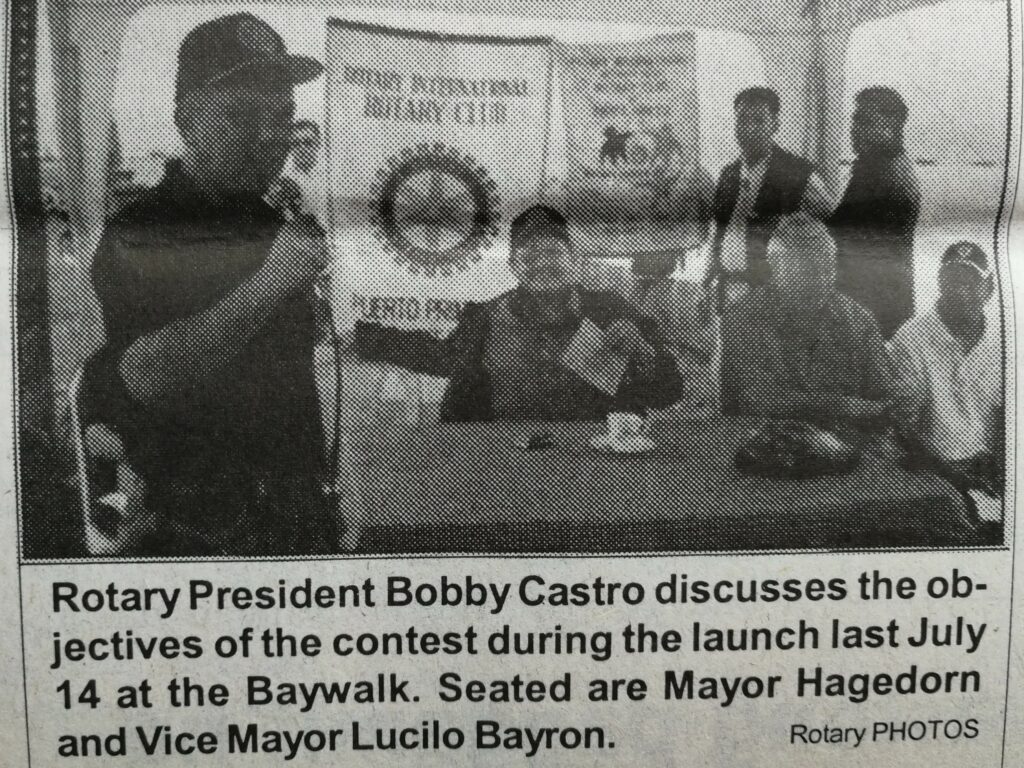 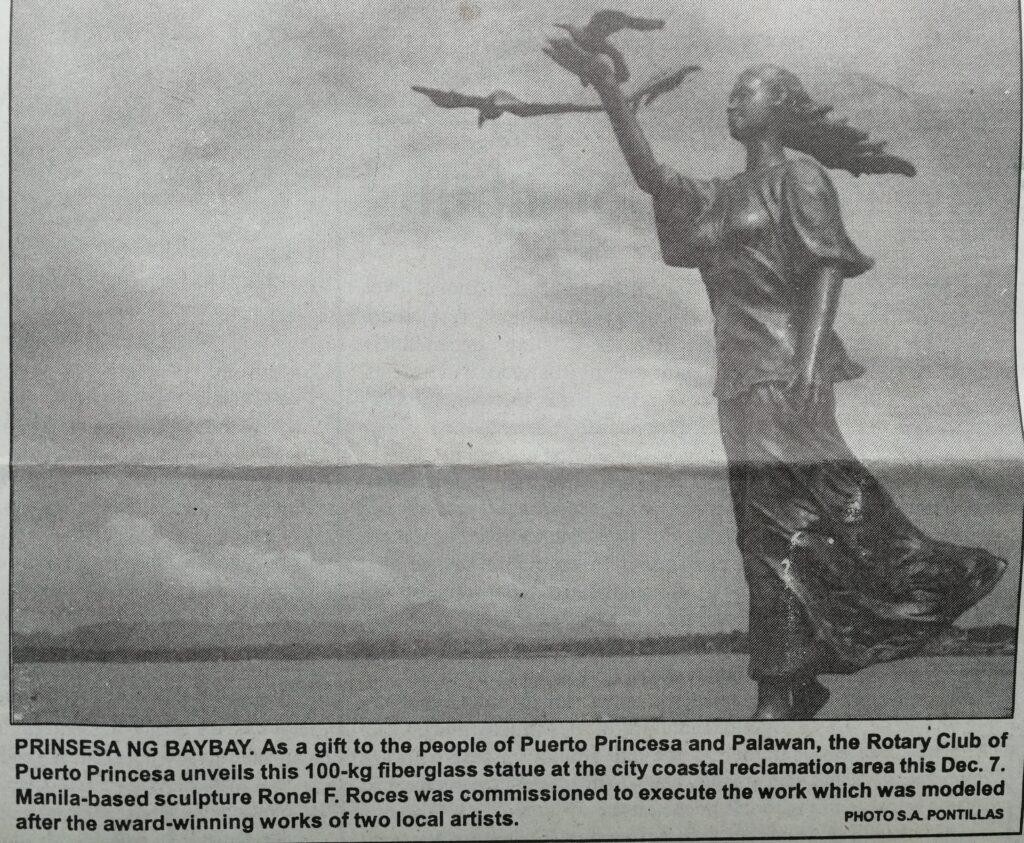