CCP bounces back from COVID, re-opens with limited screenings

CCP bounces back from COVID, re-opens with limited screenings 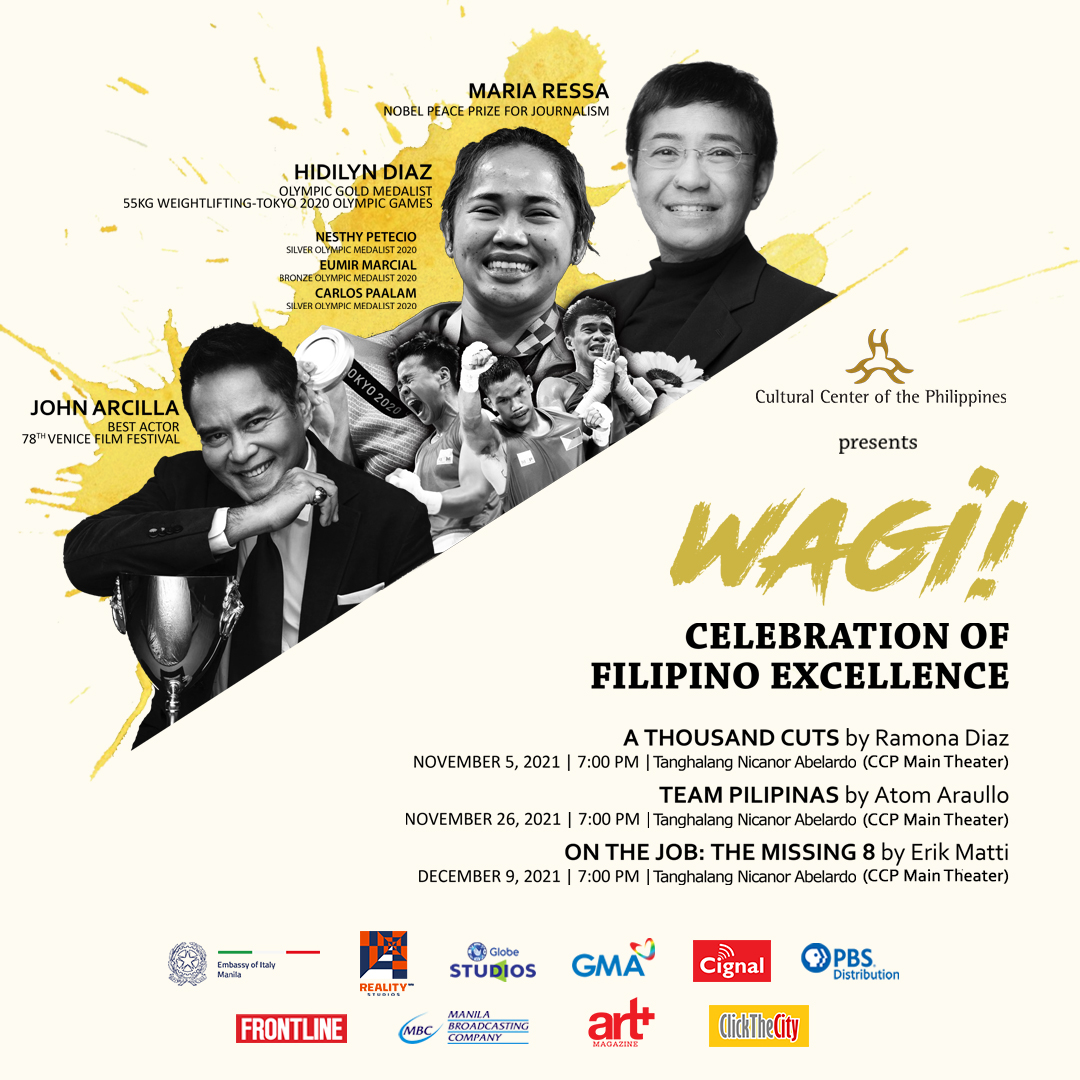 TWENTY months after it closed down its theatres and other venues, the Cultural Center of the Philippines ushers in the better normal for its patrons and audiences through the special premiere screenings of select feature and documentary films celebrating Filipino excellence.

Collectively known as “WAGI: A Celebration of Filipino World-Class Excellence,” all the special screenings will happen at 7pm, at the Tanghalang Nicanor Abelardo (Main Theater).

On November 5, CCP opens its doors with the “A Thousand Cuts,” a social documentary by filmmaker Ramona Diaz, to celebrate the first Nobel laureate from the Philippines.  A talkback with the film director and select media practitioners follows.

Early October, journalist Maria Ressa, the central figure in Diaz’s documentary, received the Nobel Peace Prize, along with Russian journalist Dmitry Muratov, for her commitment and efforts to uphold press freedom and democracy.

From the same director behind “Imelda” (2014) and “Motherland,” the film looks into the worldwide erosion of democracy, fueled by social media disinformation campaigns.  This 2020 Sundance Film Festival documentary focuses on the battle for truth and democracy.

Filipino pride and excellence in sports takes the spotlight in the special screening of GMA 7 documentary “Team Pilipinas” on November 26. Produced by broadcast journalist Atom Araullo, the docu film honors the athletes who represented the Philippines and bagged medals at the 2020 Tokyo Olympics.

Highlighting the Philippines’ best Olympic performance since 1924, it draws attention to weightlifter Hidilyn Diaz who is the first Filipino to bring home an Olympic gold medal, boxer Nesthy Petecio who is the first Filipino woman boxer to win an Olympic (silver) medal, boxer Carlo Paalam who won the silver in the men’s flyweight division, and boxer Eumir Marcial who brought home a bronze medal in the men’s middleweight division.

On December 9, celebrate world-class acting talent with the Philippine premiere of “On The Job: The Missing 8,” a film that brought the Coppa Volpi (Volpi Cup) for Best Actor to actor John Arcilla.

At the recently concluded 78th Venice Film Festival, Arcilla bagged the award for his performance as a journalist investigating the mysterious disappearance of his colleagues, and how it relates to a prisoner who is temporarily freed to carry out assassinations (portrayed by actor Dennis Trillo).  The award-winning film is the sequel to the 2013 film of the same title.

Directed by Erik Matti, the special screening is co-presented with the Embassy of Italy in Manila.  There will be a talkback after the screening.

In March 2020, the CCP shut down its venues due to the COVID-19 pandemic.  Following the new rulings on the government-imposed lockdowns, the CCP will open with 30 per cent audience capacity.

Only audiences who are fully vaccinated will be allowed inside the theaters. They need to present their vaccination card/ID at the entrance, fill up a health declaration form or the Stay Safe app, and present their tickets/scannable QR Codes on mobile.  The guards will do routine temperature checks before entering.

Aiming to make viewing inside the theatres as safe as possible, the CCP has been rolling out safety measures on its premises in preparation with the re-opening.  Aside from the usual safety protocols such as wearing mask/face shields inside the venue and social distancing, the CCP has installed portable air hepa filters and automatic alcohol dispensers around the building, places social distancing markers, adapts contactless ticketing, and reduces chokepoints.  Entrances and exits will be limited and controlled to reduce the risk of viral transmission.