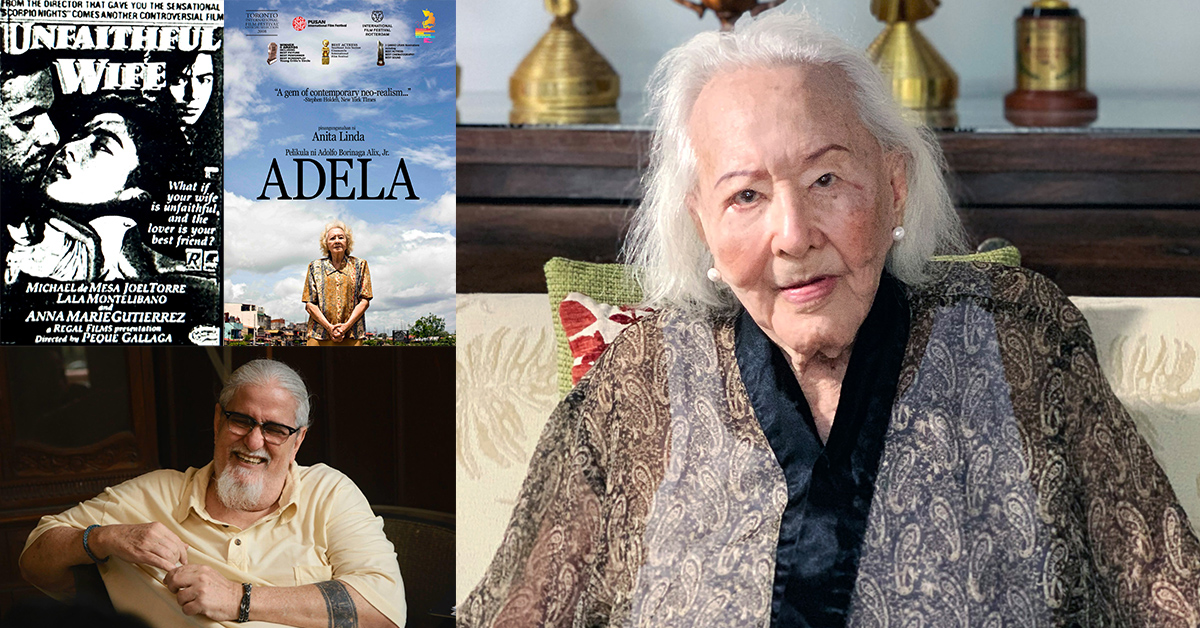 The Cinemalaya Philippine Independent Film Festival will hold a special tribute screening of “Unfaithful Wife” and “Adela” in honor of the late film greats Peque Gallaga and Anita Linda, respectively, during the Cinemalaya run on August 7-16, 2020.

“Unfaithful Wife” stars Joel Torre (Fidel), Ana Marie Gutierrez (Irene), and Michael De Mesa (Crispin).  The story unfolds with Fidel who was devastated over the death of his wife.  He tries to resume his normal life by turning to his old friend Crispin and wife Irene.  Fidel makes some effort with another woman but fails, and he soon finds himself in Irene’s arms.  That same evening a young girl is brutally murdered.  Fidel, unable to account for his whereabouts, is named the prime suspect and eventually put to jail.  Crispin, meanwhile, learns of Irene’s infidelity.  His friendship is put to the test when Fidel escapes, gets wounded, and asks Crispin to kill him and put him out of misery.

“Adela” on the other hand, features Anita Linda in the title role of a former radio personality, marking her 80th birthday.  Living on her own in the slums of Manila, Adela is surrounded by a sea of humanity and with it their problems, successes, and trivialities.  While going through her daily chores, Adela gets swept up in the mundane and dramatic events of those around her.  Adela is about the quiet moments in life that can fill us with either joy or sorrow.

Both considered icons in their respective fields, Peque Gallaga (Maurice Ruiz de Luzuriaga Gallaga in real life) was a multi-awarded Filipino filmmaker.  His most significant achievement in film was “Oro, Plata, Mata”, which he directed after winning a scriptwriting contest sponsored by the Experimental Cinema of the Philippines.  He has received an award from the International Film Festival of Flanders-Ghent, Belgium in 1983; a Special Jury Award from the Manila International Film Festival; and the Gawad CCP Para sa Sining in 2004.  Through the years, Gallaga won several Gawad Urian awards: Best Director for “Oro Plata Mata” in 1982; Best Production Design for “Ganito Kami Noon, Paano Kayo Ngayon?” (together with Laida Lim Perez) in 1976, and for “Manila By Night: City After Dark” in 1980.  Also an actor, Gallaga played a part in “Tatlong Taong Walang Diyos” and Brocka’s “Gumising Ka, Maruja” (1978).  Gallaga became a full-fledged filmmaker with his second directorial effort, “Oro Plata Mata” (1982), and later, “Scorpio Nights” (1985), arguably his two best movies.  He also directed the movies “Virgin Forest” (1985), “Unfaithful Wife” (1986), the “Shake, Rattle and Roll” series, “Once Upon a Time” (1988), and “Gangland” (1998).  Peque passed away on May 7, 2020 at 76 years.

Award-winning actress Anita Linda, born Alice Bueñaflor Lake, portrayed a romantic lead in her youth, and later gained critical acclaim for her portrayals in maternal or elderly roles.  At the age of 74, she became the oldest actress to ever win a FAMAS Award, when she was named Best Supporting Actress for Ang Babae sa Bubungang Lata.  In 2008, at age 83, she was named Best Actress in the 10th Cinemanila International Film Festival (Southeast Asia Film Competition) for her portrayal of the title character in Adela.  Internationally, she was cited by the Fajr Film Festival (Iran), winning the Crystal Simorgh Award for Grandmother (2009).  In 2010 she was named Best Leading Actress at the 54th Asia-Pacific Film Festival, held in Taipei, Taiwan – for the film Grandmother (2009).  She died at the age of 95 on June 10, 2020.

In view of the COVID-19 situation, the 16th edition of Cinemalaya migrates to online platform, via Vimeo.  Cinemalaya Philippine Independent Film Festival is a project of the Cultural Center of the Philippines and the Cinemalaya Foundation, Inc.  Established in 2005, Cinemalaya is an all-digital film festival and competition that aims to discover, encourage and honor cinematic works of Filipino filmmakers.

For details, visit www.cinemalaya.org or www.culturalcenter.gov.ph, or contact the CCP Media Arts at 8832-1125 local 1704 to 1705 and the CCP Box Office at 8832-3704.  Check out the official CCP and Cinemalaya Facebook and Instagram accounts. (PR)