A distinguished jury of prominent personalities comprises this year’s jury panel for Cinemalaya 2022. They will determine who among the competing films—11 full-length films and 12 short films—will top the 2022 Cinemalaya lineup. 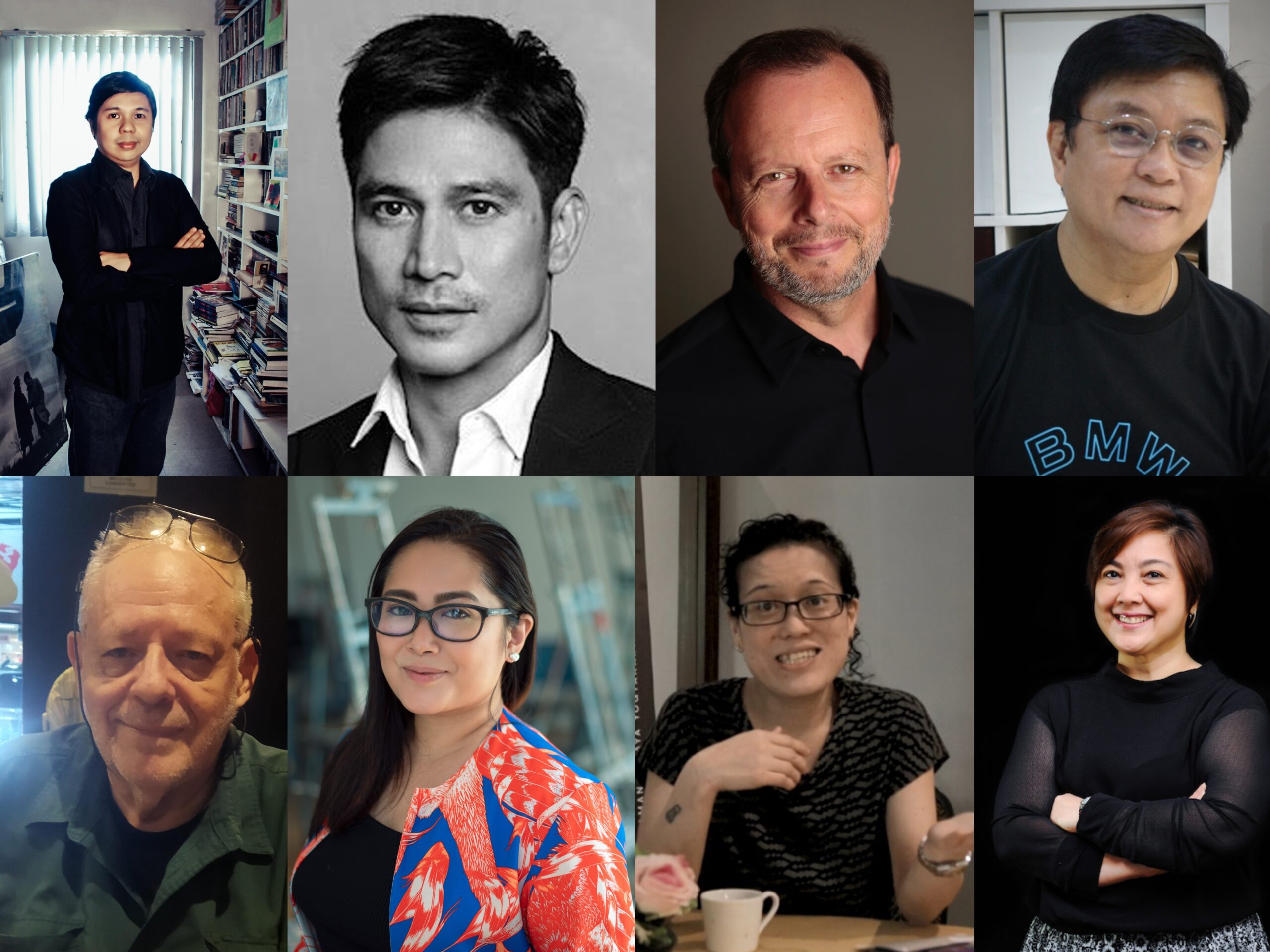 Frédéric Auburtin leads the main competition jury.  His participation as a Jury Chairman at the festival is part of the celebration of the 75th Philippines-France diplomatic relations.

Auburtin initially studied music and literature before pursuing a career in film. He made his debut as an assistant director with renowned directors—Claude Berri, Francis Veber, Maurice Pialat, Luigi Comencini, Bertrand Blier, Jean-Jacques Annaud, Jean-Paul Rappeneau, and Randall Wallace for The Man in the Iron Mask.

In 1998, he co-directed and composed the score for his first feature film, The Bridge, alongside Gérard Depardieu.

From then on, he was able to demonstrate his versatility as a film director for cinema and television, including Special Correspondents, The Worst Week of My Life, Volpone, as well as singular projects such as the collective film Paris, Je t’aime, for which he also supervised transitions and editing, and United Passions, a complex and adventurous film whose international cast retraces the sulfurous FIFA’s 100-year history.

Currently, Auburtin is working on two feature films and a mini-series and is interested in discovering new works by Filipino filmmakers.

Jeffrey Jeturian joins Auburtin on the jury panel. He has directed feature films that foreshadowed a thriving independent cinema in the Philippines.  He succeeded in attracting viewers outside of the arthouse aficionados by making timely social topics and concerns appealing.

Three of his films, Pila Balde (1999), Tuhog (2001), and Kubrador (2006), were listed among the top 20 Filipino films of the previous 20 years by The Manunuri ng Pelikulang Pilipino.  Pila Balde won various accolades overseas, while Tuhog participated in the 58th Venice International Film Festival in 2001.  Kubrador—with over 40 national and international honors—is often regarded as Jeturian’s most successful film—was screened at over a hundred international cinema festivals, including a U.S. debut at the New York Museum of Modern Art (MoMA).

Jeturian has also done several TV series, particularly the popular Be Careful with My Heart (2012) and his most recent works Encounter (2021) and What We Could Be (2022).  For a docu-drama, he collaborated with Ellen Ongkeko-Marfil, and co-produced and co-directed footage for Ang Pagbabalik Ni Gregoria de Jesus (2022) which tells the story of de Jesus, the wife of Andres Bonifacio. The aforementioned is Jeturian’s first attempt in the historical genre.

Piolo Pascual is also part of the jury.  Pascual is regarded as the “Philippines’ Ultimate Heartthrob” in the showbiz industry.

Pascual has starred in arthouse films such as Lav Diaz’s Hele sa Hiwagang Hapis (A Lullaby to the Sorrowful Mystery) in 2016, which won The Alfred Bauer Prize at the 66th Berlin International Film Festival, and Ang Hupa (The Halt) that had its debut premiered at the 2019 Cannes Film Festival Directors’ Fortnight.  He also appeared as one of the main characters in Erik Matti’s On The Job which received a standing ovation at the 2013 Cannes Film Festival.

Pascual also produced award-winning films such as Kita Kita and the hit Kimmy Dora franchise through Spring Films, a production company he founded alongside Joyce Bernal and Erickson Raymundo.  Kuya Wes, which competed in the full-length film category at the 2018 Cinemalaya, was also created by Spring Films.

Another member of the jury is Maria Madonna Tarrayo, the head of Commercial Production Houses Group (CPHG) and is the Chairman of the Advertising Suppliers Association of the Philippines (ASAP).

Whilst managing several teams in ads and entertainment projects, she has created award-winning advertisements, films, and television programs.  For Cinemalaya, she worked on Chris Martinez’s 100 and Marlon Rivera’s The Woman in The Septic Tank; for Unitel, she worked on Chris Martinez’s I Do Bidoo Bidoo, Yam Laranas’ Abomination, and Adolf Alix’s Whistleblower. Tarrayo also served as the Executive Producer for the Coke Studio series, Batang Poz for IWant and Dreamscape, Adventure Your Way for AXN, Hot Ones for IFlix, Trese for Base Entertainment, and other TV5/Cignal shows. She is presently in charge of film and television series development and production.

Completing the jury is Makiko Wakai, who works as the coordinator/programmer of the Yamagata International Documentary Film Festival, which strives to highlight and bring together young filmmakers from East Asia to the Middle East.  She also organizes the Feminist Active Documentary Video Festa, where she distributes and screens independent films.  Currently, Wakai is in the New Asian Currents program that showcases and promotes the work of emerging Asian documentaries, regardless of format or duration.

Cinemalaya is among the film festivals where The Network for the Promotion of Asia Pacific Cinema (NETPAC) prize is awarded.  The award is meant to promote Asian cinema and recognize the works of young Asian filmmakers.

Another juror is Ida Anita del Mundo, an active NETPAC member, and screenwriting and directing instructor at De La Salle-College of St. Benilde in Manila, Philippines.  Her first film K’na, the Dreamweaver, premiered at the 2014 Cinemalaya Film Festival where it received the Special Jury Prize.  It was named Best of Show at the 2015 Female Eye Film Festival in Toronto, Canada, and was honored with an Ani ng Dangal (Harvest of Winners) award by the National Commission for Culture and the Arts in 2015.  K’na, the Dreamweaver is the first feature film about the T’boli people of South Cotabato, Mindanao, and the first film in the T’boli language. She went on to direct documentaries and music videos after that.

Founding member of NETPAC France, Max Tessier, is the third on the jury panel.  He has been a film critic for several newspapers and magazines since 1963, particularly Jeune Cinéma (1965 to 1971), Ecran (1972 to 1979), La Revue du Cinéma, and other publications including Le Monde and Le Mondec diplomatique.  He also contributed to magazines abroad, notably Cinemaya in New Delhi and Les Voix in Kyoto and Paris.

Tessier served as an artistic consultant for several festivals, primarily for the official selection of the Cannes Film Festival (1980–2000), and has served on juries in European and Asian festivals in San Sebastian, Vesoul, Cairo, Tokyo, Pusan, Gwanju, Hong Kong, Singapore, New Delhi, Trivandrum, Colombo, Vladivostok, and CineManila, Cinemalaya, CineFilipino, QCinema, among others.

Cinemalaya 2022 will take place at the various venues of the Cultural Center of the Philippines (CCP) from August 5 to 14, 2022.  Aside from CCP, there will also be nationwide screenings in select partner Ayala cinemas and SM Cinemas from August 10 to 16, 2022.