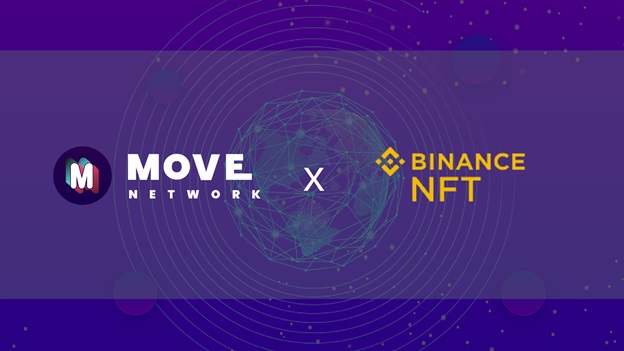 MOVE Network, the world’s leading NFT aggregator, is working with Binance NFT Marketplace to launch an NFT drop for the American superhero horror film named Brightburn. This highly anticipated NFT debut is expected to drop as early as Q3 2021.

MOVE is kicking things off by creatively tokenizing an esteemed selection of Brightburn’s best artwork and digitizing the world’s first superhero horror film NFTs. On April 29, 2021, MOVE Network announced its partnership with The H Collective, a well-known film corporation working with Hollywood’s top producers and talent, for the upcoming release of premier NFT projects in the film industry such as this Brightburn NFT drop.

Binance NFT Marketplace offers an open market for artists, creators, crypto enthusiasts, NFT collectors, and creative fans around the world, with the best liquidity and minimal fees. Consisting of three categories, Premium Events, Mystery Box and a trading Marketplace, Binance NFT features valuable collectibles and an easily accessible trading market for all of its users.

MOVE proudly confirms its NFT Drop Event for Brightburn digital assets on one of the world’s largest NFT marketplaces, Binance NFT Marketplace. This collaboration allows MOVE to leverage Binance’s blockchain NFT technology and offer Brightburn themed NFTs on Binance NFT Marketplace. The exciting NFT Drop Event is expected to capture the attention of Brightburn and superhero fans alike. The fans can subscribe today on MOVE Network to stay informed on the latest news. With a promising future ahead, MOVE will continue co-producing innovative digital assets with its exclusive film industry IP.

“The NFT Drop on Binance NFT Marketplace gives both companies a more robust way to market and distribute content. With the trust, integrity, and transparency that Binance brings, MOVE will bring its unique value proposition to the world of movie fans. In our collaboration with Brightburn, we have access to a broad portfolio of IP and unique NFT offerings that is beneficial to our clients and partners,” said Daniel Bokun, President & Co-Founder of MOVE Network.

“The movie industry is always changing and we’ve been lucky to have been part of that process for the last few years. Movies and streaming content are rapidly moving into the crypto space via NFTs, which is another major shift in the world of global entertainment. We’re excited by both our collaboration with MOVE and witnessing Brightburn transform as a crypto asset,” said Kent Huang, Executive Producer of Brightburn and the Co-Chairman of The H Collective.

“The NFT launch on Binance NFT Marketplace would benefit both parties and further extend the NFT ecosystem. We are proud of MOVE and strongly support MOVE to develop innovative NFT product and derivatives. As investor, we are expecting MOVE to lead the market and re-define the NFT market” , said Richard Wang, Partner of DraperDragonFund.

MOVE Network is part of a larger tech group, Aladdin Technology Holdings, which specializes in blockchain, fintech platforms, and emerging platform technology. As the world’s largest NFT aggregator, MOVE covers a wide spectrum of NFT products such as entertainment, music, artwork, and Esports. MOVE is teaming up with different IP distribution partners for NFT issuance in Asia and North America. (PR)