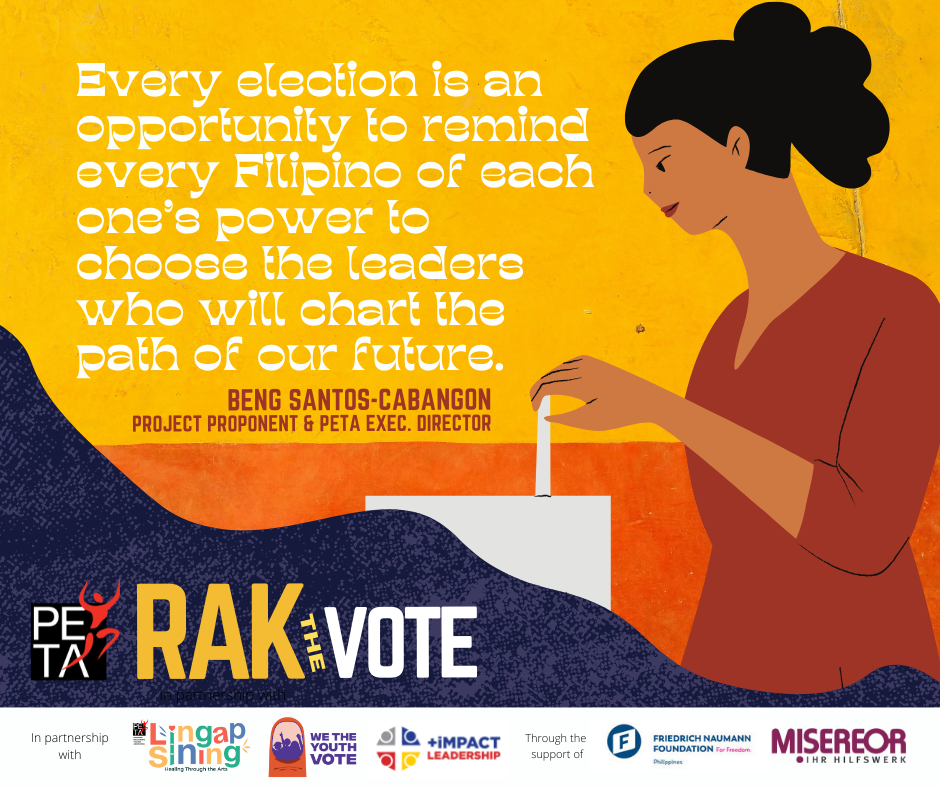 The Philippine Educational Theater Association (PETA) together with its partners, PETA Lingap Sining, Impact Leadership, and We The Youth Vote, through the support of Friedrich Naumann Foundation for Freedom Philippines, and MISEREOR Germany, embark on a creative voters’ education campaign called Rak The Vote: Mobilizing The Youth For Change from June to October 2021 to encourage young people to register and vote in the upcoming national elections in May 2022.

According to the advocacy group We the Youth Vote, the youth will make up the biggest voting population this 2022, comprising #40MillionStrong voters composed of Gen Z and Millennials ages 18-39 years old.

In a society where the youth dominate in numbers, significant change in our country’s socio-economic and socio-political situation is a huge possibility – all it needs is a little push, one could say, to “rock the boat”. As elections come closer, the need for the youth to become deeply involved in claiming their stake for a better tomorrow grows stronger. 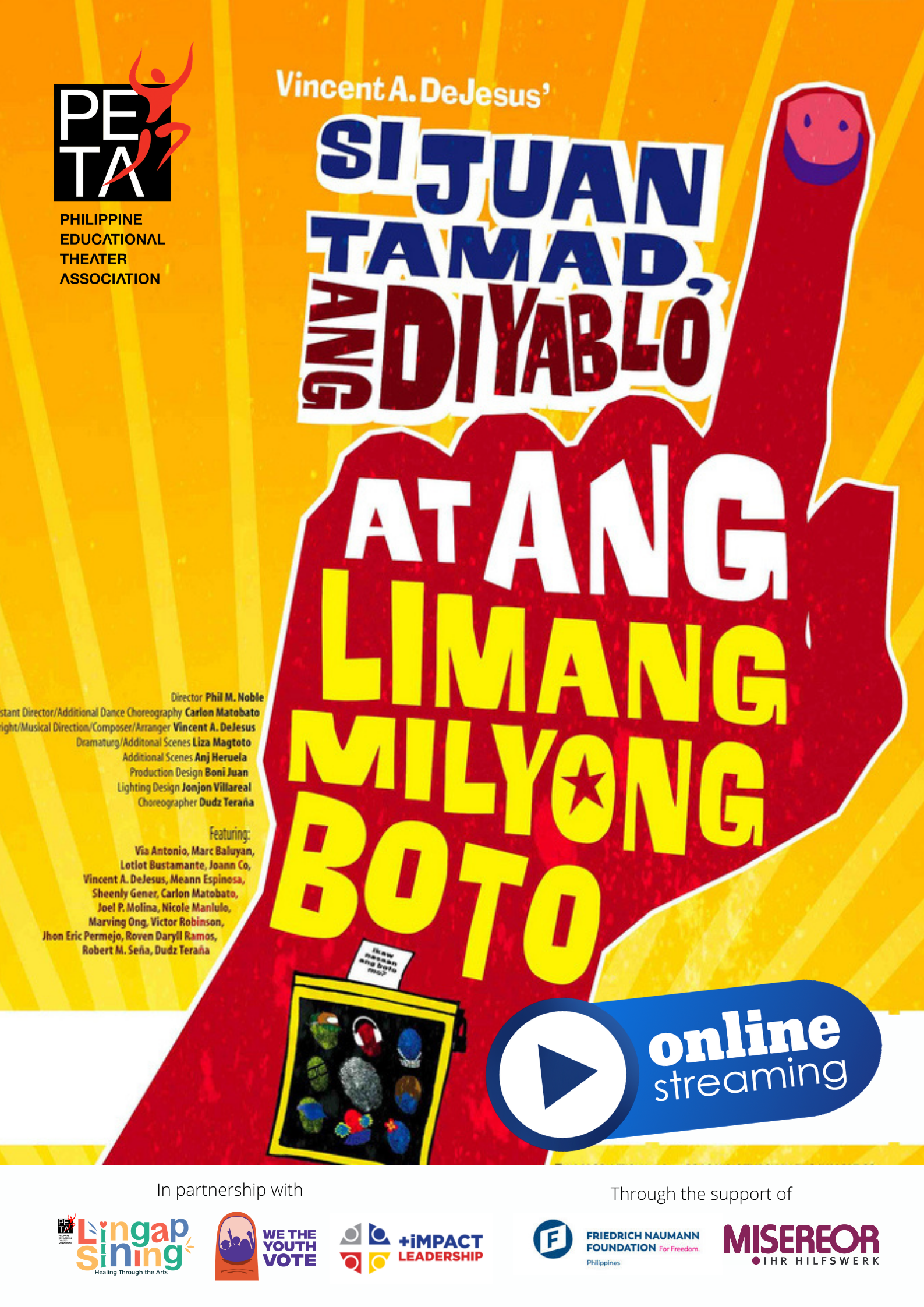 In light of this, PETA’s #RakTheVote uses the power of theater and the arts to motivate young people to seize their power for change – to register, to vote, to make a stand, to participate in good governance, and to express their sentiments over things happening in our society and articulate what changes they desire.

“PETA has always believed that art and theater has a greater purpose than just being a form of entertainment. In our 50-year history, we have always stood for democracy.

Every election is an opportunity to remind every Filipino of each one’s power to choose the leaders who will chart the path of our future,” says Rak the Vote project proponent and PETA Executive Director Beng Cabangon.

“We know that the youth can make a difference. Using the arts and creative approaches, PETA hopes to engage the young voters in meaningful dialogue and reflection about the elections. The goal is to encourage them to let their voices be heard and exercise their right to vote towards effective and meaningful youth participation.” she adds.

PETA is using a mix of existing videos from its past voters’ education campaigns, and a series of fresh materials created specifically to address the youth during this time. It kicks off the campaign with an online streaming of the vaudeville musical about elections, Vincent De Jesus’ Si Juan Tamad, ang Diyablo at ang Limang Milyong Boto, from June-August 2021. Cited in 2009 by the Philstage Gawad Buhay! Awards as one of the Outstanding Musical Performances of that year, the play is not only entertaining and wildly funny, it also underscores the significance of “every Juan’s vote” in creating ripples of positive change. Every online streaming is followed by a Talkback Session with PETA artists as well as influencers from We The Youth Vote and Impact Leadership network such as Miss Trans Global 2020 Mela Habijan, actress Ria Atayde, as well as content creators like Janina Vela, Macoy Averilla aka Macoy Dubs, and Thysz Estrada, to name a few.

Following this is a social media barrage featuring young thespians, led by select cast members from PETA’s hit OPM musical Rak of Aegis, as well as young and inspiring Filipino influencers, to attract greater interest in the campaign.

Using the online space as a place for deeper discussion, information dissemination, critical reflection, and collective action on the upcoming elections, PETA will be producing a series of videos and informative materials that aim to mobilize citizens through encouraging local voters’ registration initiatives on the ground and through social media. These efforts are part of an overall drive to register an additional 4M youth million voters by September 30, 2021.

“We have been badly beaten-up financially because of the closure of our theater for more than a year now. We have lost so much, and yet, we know that we cannot lose the hope we have for our nation. We wish to create ripples of positive impact among and with the youth in time for the national elections,” Cabangon adds.

PETA is unwavering in its mission to empower audiences using theater as a means of service to the people. PETA enjoins its audiences, the Filipino public, especially the energized young electorate, to use their power to fight for our nation’s future.

Cabangon closes with, “The elections are a critical moment that will determine our lives. We all have the power to choose the leaders who will help us build a free and just society. Together let us #RakTheVote!”

To register to vote go to bit.ly/irehistro.