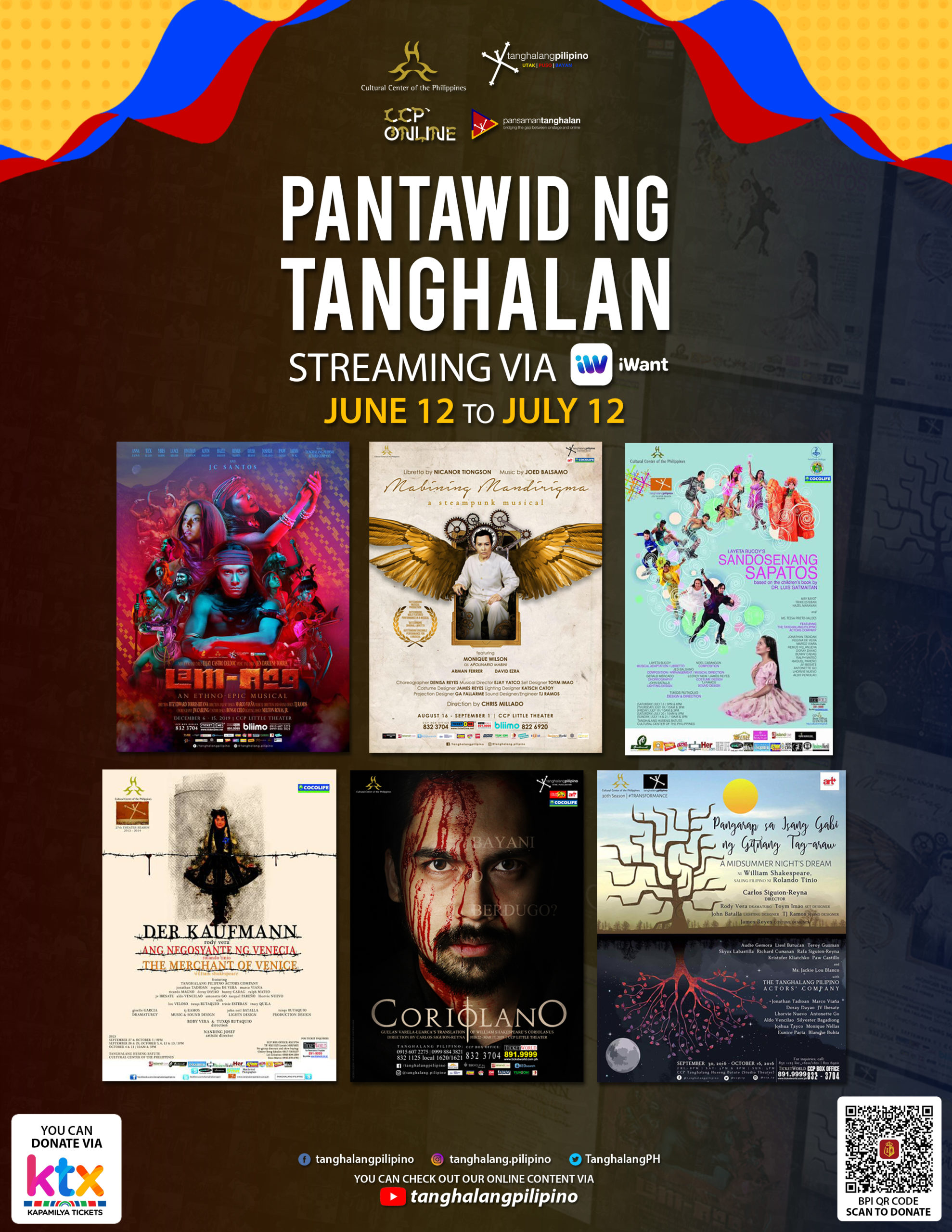 Tanghalang Pilipino (TP) and the Cultural Center of the Philippines team up with ABS-CBN’s streaming app iWant in bringing six (6) previously-staged  TP productions online through ‘Pantawid ng Tanghalan’, a fund-raising activity that seeks to sustain the company’s commitment in bringing artistically-excellent and socially-relevant productions to the public. This activity comes from the heels of TP’s online initiative, ‘PansamanTANGHALAN’, which was launched last April.

“Tanghalang Pilipino’s commitment to constantly engage our audiences, especially now that we’re in the midst of the pandemic, gave birth to our ‘PansamanTanghalan”. However, we want to elevate the audience’s experience and thankfully, iWant has agreed to partner with us in making our shows more accessible to the public.” says TP Artistic Director Nanding Josef. “This partnership fortifies a strong future for the entire performing arts industry in the digital landscape. And we’re so glad that TP is at the forefront of that movement.” 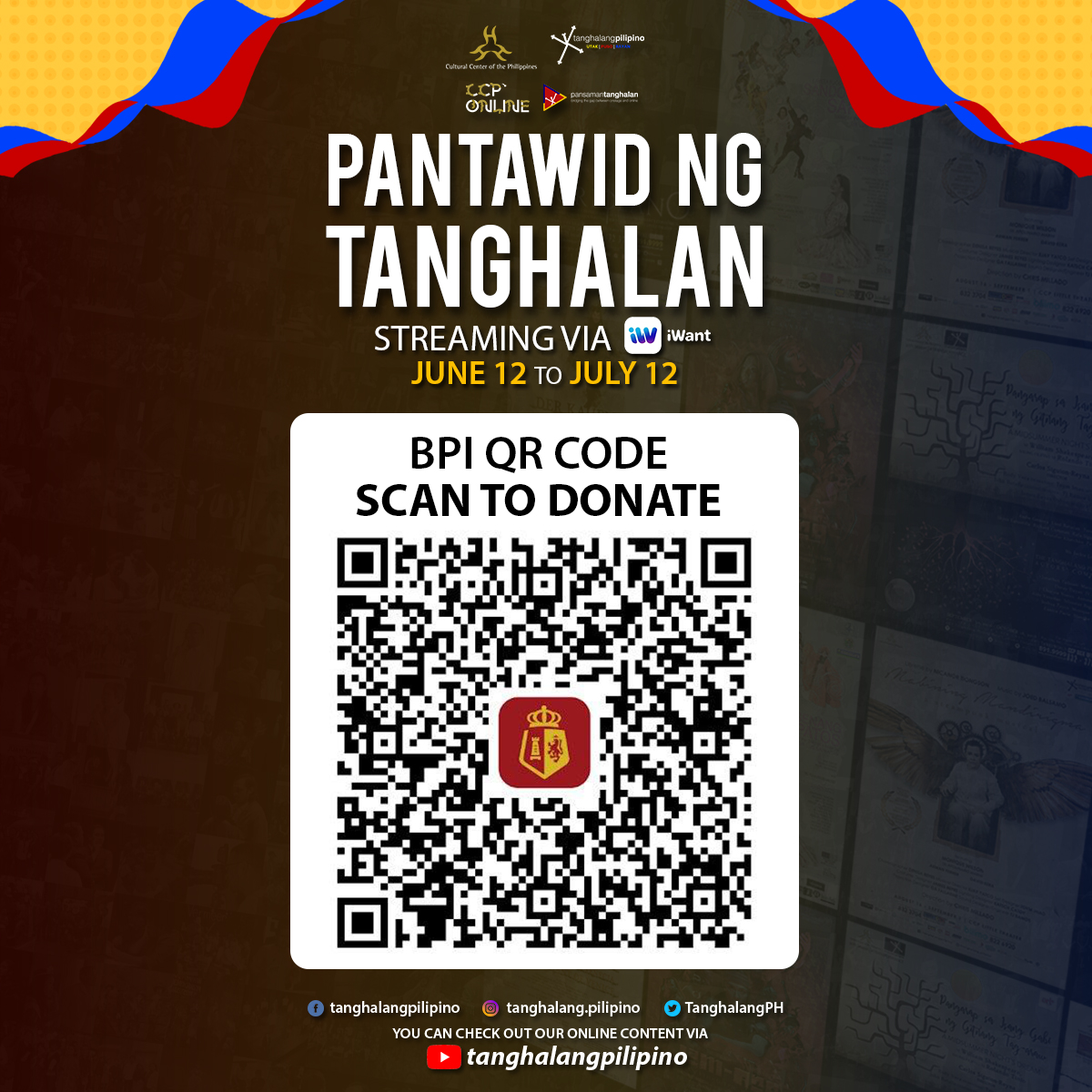 Coming from a successful run last December 2019 and originally slated as TP’s 34th Season opening production, Lam-Ang, An Ethno-Epic Musical returns, albeit online, to tell the story of the oldest epic hero in Luzon. With book and lyrics by Eljay Castro Deldoc, music by Jen Darlene Torres, and directed by Marco Viaña and Fitz Edward Bitana, the musical stars JC Santos in the title role, together with Anna Luna, Tex Ordonez-De Leon, and some of the most promising young theater actors in the country today.

Mabining Mandirigma, a steampunk musical by Dr. Nicanor Tiongson and Joed Balsamo, and directed by CCP Vice President and Artistic Director Chris Millado, has already enjoyed four successful restaging, since it premiered in 2016. The musical chronicles the legal and diplomatic heroism of the sublime paralytic, Apolinario Mabini, played brilliantly by Ms. Monique Wilson. A winner of astounding twelve (12) Gawad Buhay! Awards, including Outstanding Musical, Mabining Mandirigma was hailed by inquirer.net as ‘One of the Best Filipino Musicals in recent years’. Snippets of the show are already available on the Tanghalang Pilipino Youtube channel.

A story about a legendary Roman soldier turned into a tyrannical leader, Coriolano effectively displays how personal and selfish ambition can lead to one’s ultimate downfall. Translated by Guelan Varela – Luarca and directed by acclaimed filmmaker Carlos Siguion-Reyna, the play stars Marco Viaña as Coriolano, together with Frances Makil-Ignacio and Sherry Lara alternating as his strong-willed mother, Volumnia. Coriolano had its premiere in January 2019 at the CCP Little Theater.

Der Kaufmann, an adaptation of Shakespeare’s Merchant of Venice, relives the horror of the holocaust, with the Nazis directing the Jewish “actors”, underscoring the dehumanizing effect of racism and intolerance. Adapted for stage by Rody Vera, with Tuxqs Rutaquio co-directing, Der Kaufmann features the Tanghalang Pilipino Actors Company. The most awarded play during the 2014 Gawad Buhay! Awards, Der Kaufmann brought home seven (7) awards, including Outstanding Translation or Adaptation and Outstanding Ensemble for a Play or Musical.

A musical based on the Palanca Award-winning children’s book, Sandosenang Sapatos tells a powerful story of a father’s selfless love to his differently-abled daughter. Adapted for stage by Layeta Bucoy, with music by Jed Balsamo and Noel Cabangon, and direction by Tuxqs Rutaquio, Sandosenang Sapatos has effectively woven the magic brought about by wheelchair-bound Susie’s fantasy and the grim realities that she lives in. The musical garnered nominations from the 2014 Gawad Buhay! Awards, including one for Outstanding Children’s Production. Songs from the musical are also available on Spotify. The book of Sandosenang Sapatos is now a Hiyas Classic, and its premium edition is now available for purchase through OMF Publishing.

The shows mentioned will be streamed on iWant from June 12 to July 12. 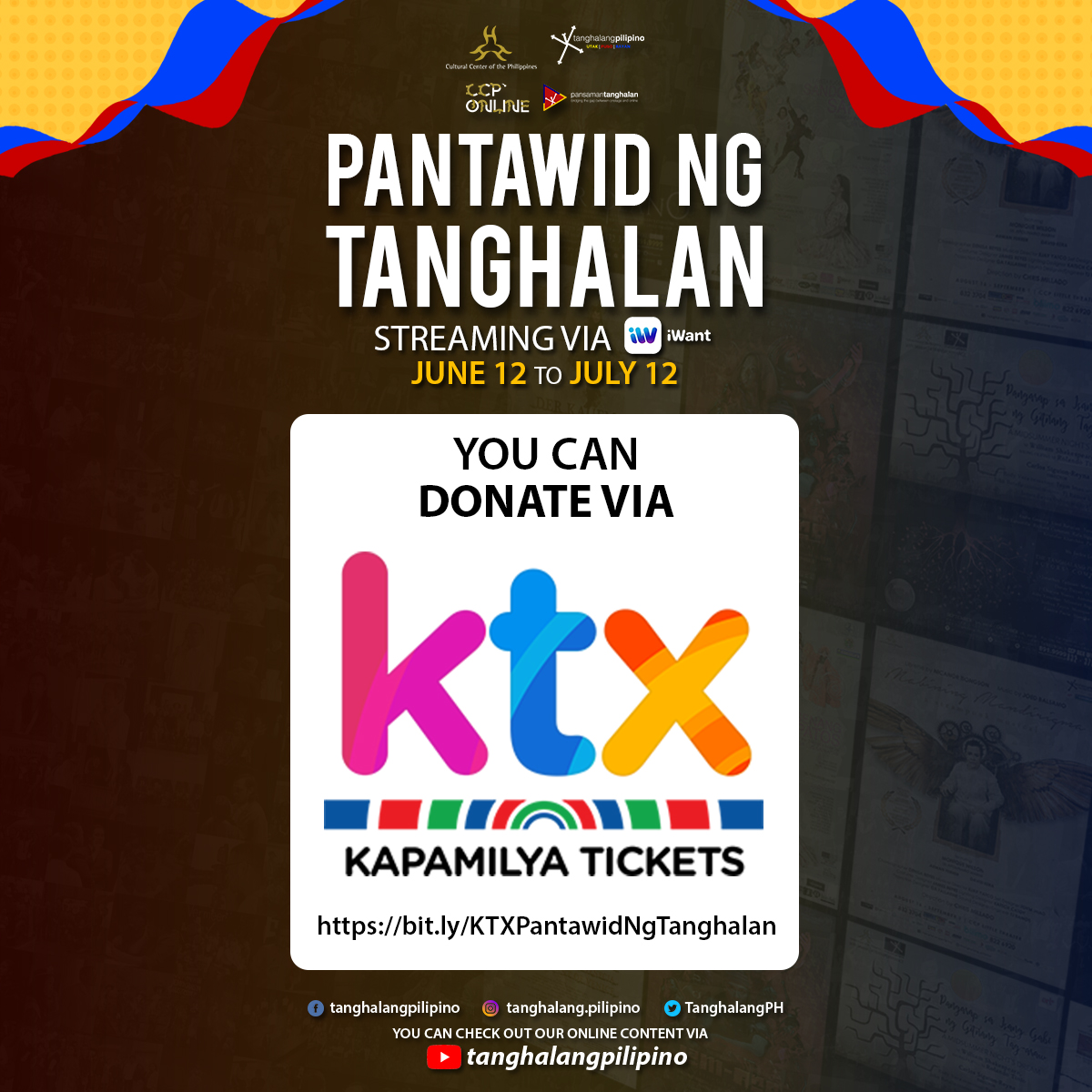 You can donate by scanning the TP BPI QR code seen on our public materials or by depositing to the details below:

You can also donate through KTX, ABS-CBN’s ticketing platform:

Aside from iWant, snippets of shows can also be viewed through Tanghalang Pilipino official Youtube channel: http://youtube.com/tanghalangpilipino

For collaborations, sponsorships and donations, you can email us at tanghalangpilipinomarketing@gmail.com or contact 0999-8843821. (PR)