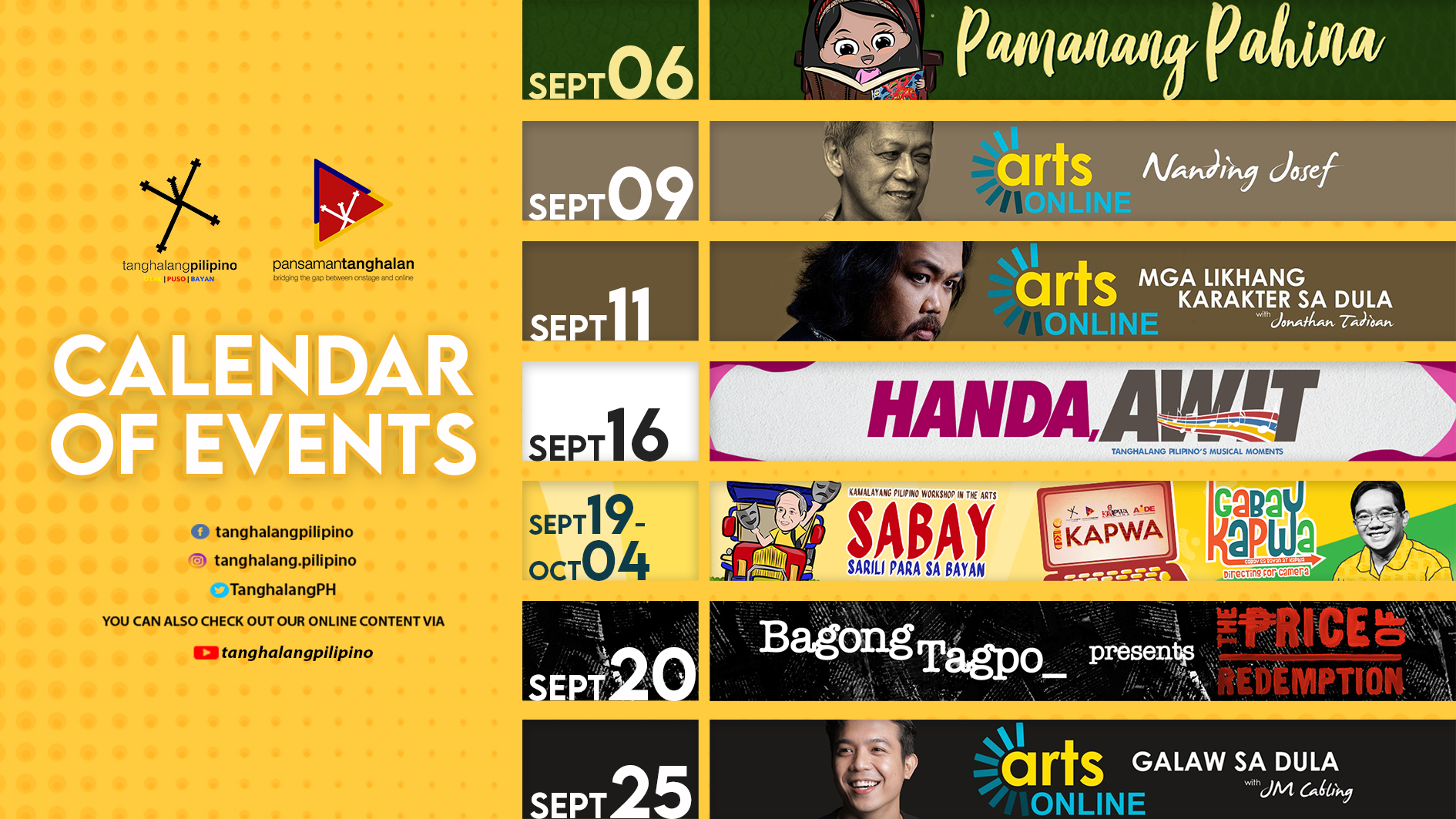 Tanghalang Pilipino (TP), the resident theater company of the Cultural Center of the Philippines, plots the month of September with more productions, expanding their already prolific library with even more content through PangsamanTanghalan. The productions to be published in the coming days will serve as continuations to series which debuted back in August, during their Buwan ng Wika celebrations. These series will enjoy new creative installments and are geared to cover audiences of all ages.

Pamanang Pahina is back to share insightful stories for children to start TP’s September online productions. Members of the Actors Company return to read more of OMF Literature-Hiyas’ dense library of wonderful stories, and for September, they will be bringing to life a timely and informative tale in May Giyera sa Katawan ni Mark by Dr. Luis Gatmaitan, adapted for the production by Nono Pardalis. As the title suggests, Mark’s body will try and resist foreign bacteria entering his body. Visuals for the antibodies and bacteria will be produced by Anino Shadowplay Collective. May Giyera sa Katawan ni Mark premiered on PangsamanTamghalan last September 6.

TP will be releasing a special medley of songs from a beloved favorite for local theater fans for the next concert to be staged in Handa, Awit. Nar Cabico will be reprising his role in a special performance of songs from ZsaZsa Zaturrnah: Ze Muzikal, the award-winning play by librettist Chris Martinez. Cabico will be singing the most memorable songs composed by Vince De Jesus with Cabico’s own arrangement, to be engineered by TJ Ramos, and will be directed by Carlitos Siguion-Reyna. This concert for Handa, Awit will be available for streaming on September 16 at 6PM, which also happens to be Cabico’s birthday.

Bagong Tagpo continues to stir creativity inside TP’s offices with another film collaboration with Voyage Studios. Directors Missy Maramara and Chuck Gutierrez, along with assistant director and Actors Company member Antonette Go, will be filming an excerpt of Anton Juan’s Centennial Literary Prize winner, “The Price of Redemption”, a haunting play that examines a parallel Philippine society during the American Colonization of the country and years of Martial Law through the lens of artists, freedom fighters, and traitors. The production will feature the Tanghalang Pilipino Actors Company’s first ensemble performance on screen for this year. “The Price of Redemption” will be available for streaming on the eve of the anniversary of the Declaration of Martial Law in the Philippines, September 20 at 6PM.

Workshops are also being prepared for interested artists who wish to learn more about theater. For this month’s iKAPWA classes, two of the most passionate theater artists in the country will be sharing their wealth of knowledge about the craft they knew and grew to love. None other than TP Artistic Director Fernando Josef will be sharing how an actor can adapt in performing for online theater productions in SArili para sa BAYan (SABAY-KAPWA). Meanwhile, theater director and former TP Artistic Director Dennis Marasigan will be teaching a special class for hopeful directors for online productions and performances through Kamalayang Pilipino pedagogy in Gabay sa Bayan at Kapwa (GABAY-KAPWA). Both classes will begin on September 19 until October 4 and will be conducted during its weekends.

TP will be closely collaborating with the CCP Arts Education Department this month to provide more lessons in theater for students. TP Artistic Director Fernando Josef held an insightful discussion through “Art Talk” last September 9, where he expounds on TP’s philosophical foundation, Kamalayang Pilipino. Through this discussion, Josef aims to impart theoretical knowledge and practical inputs that TP has employed throughout its 33-year old history, in hopes that participants can use these practices to improve artistic, teaching, and organizational skills for artists who teach, as well as cultural workers.

Senior Actors Company member Jonathan Tadioan will also be holding a Character Study workshop, where participants can learn about his techniques in developing characters in the Philippine context as guidance, as well as his methods in fully defining potential characters once on the stage. He conducted the workshop on September 11.

Finally, to conclude the CCP Arts Education – TP partnership for the month, Gawad Buhay Award-winning dance artist JM Cabling expounds on movements he employed in Lam-ang. He will also use this time to conduct a workshop on conveying narratives and emotion in choreography. The class will stream on September 25 at 10AM.

Help and support us on our mission to continue inspiring the public with relevant artistic presentations during these trying times by donating via the fundraising Pantawid Ng Tanghalan. 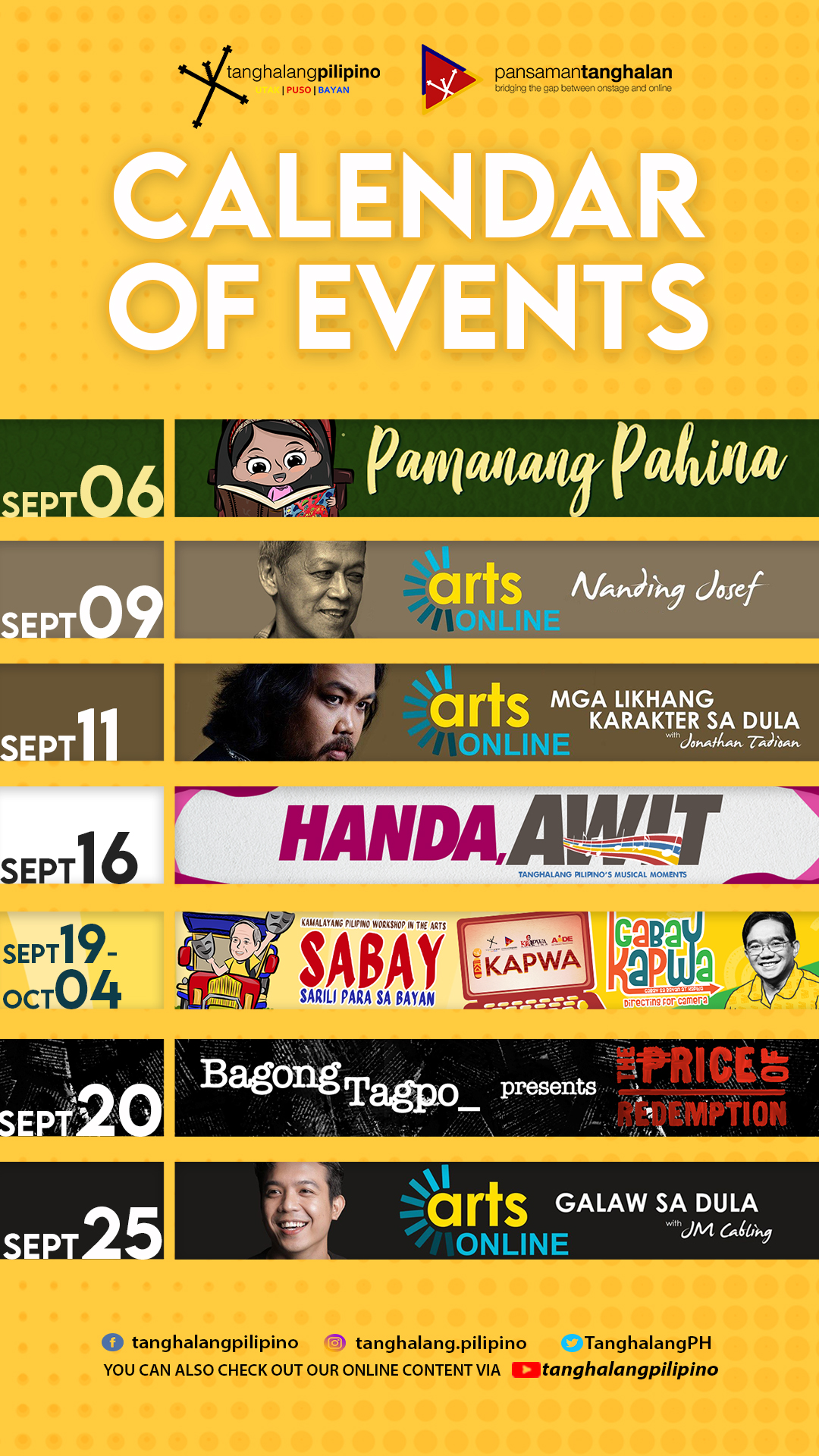 For sponsorships and collaborations, you can email us at tanghalangpilipinomarketing@gmail.com or contact 0999-8843821. (PR)